I’m very pleased to share with you this quick guest post by author Robert Goddard, whose latest novel – The Ways of the World – was published yesterday, by Transworld (details at end).

My Favourite Novel: THE MAGUS by John Fowles 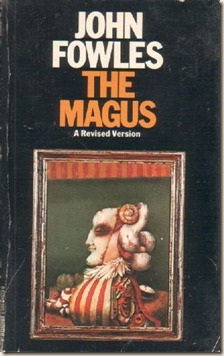 I first read The Magus shortly after it appeared in its revised 1977 edition, following original publication in 1966. Part of the appeal of the book then was probably to do with me being just the right age to be intoxicated and enthralled by its hallucinogenic mixture of psychological thriller and searing memoir. Beyond that, though, there’s the energetic lyricism of the writing. That’s what I relish most when I look back at it now.

The book works on the reader rather as the shimmering Aegean setting, the twin femmes fatales of June and Julie and the tormenting figure of the magus of the title, Conchis, work on the narrator of the story, Nicholas Urfe. First there is seduction, then there is mystery, then there is torture and finally an enigmatic resolution. No one part of the structure convinces as fiction without the others.

It is a brilliantly sustained piece of work.

Would that I could say the same of John Fowles’ writing career. After The French Lieutenant’s Woman (1969), there was a slow and disappointing decline into virtual unreadability. I went to a talk by the great man once, in Exeter, some time in the mid-1980s. Alas, all that met me at the venue was a sign reading ‘John Fowles is unwell.’

‘John Fowles is depressed’ might have been more accurate, as I discovered when I read his diaries, published a few years ago, following his death in 2005. It’s probably best to know as little as possible about a writer you admire. Their personalities are apt to disappoint.

So, forget the writer. But enjoy his work. Anyone who hasn’t read The Magus has something to look forward to. I envy them. 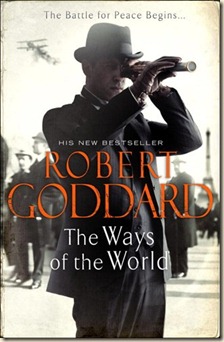 Robert Goddard’s latest novel, The Ways of the World is out now. It is, I believe, the first in a new series. It is very close to the top of my TBR mountain, so hopefully you’ll be seeing more of it on the blog in the near future.

1919. The eyes of the world are on Paris, where statesmen, diplomats and politicians have gathered to discuss the fate of half the world’s nations in the aftermath of the cataclysm that was the Great War. A horde of journalists, spies and opportunists have also gathered in the city and the last thing the British diplomatic community needs at such a time is the mysterious death of a senior member of their delegation. So, when Sir Henry Maxted falls from the roof of his mistress’s apartment building in unexplained circumstances, their first instinct is to suppress all suspicious aspects of the event.

But Sir Henry’s son, ex-Royal Flying Corps ace James ‘Max’ Maxted, has other ideas. He resolves to find out how and why his father died – even if this means disturbing the impression of harmonious calm which the negotiating teams have worked so hard to maintain. In a city where countries are jostling for position at the crossroads of history and the stakes could hardly be higher, it is difficult to tell who is a friend and who a foe. And Max will soon discover just how much he needs friends, as his search for the truth sucks him into the dark heart of a seemingly impenetrable mystery.