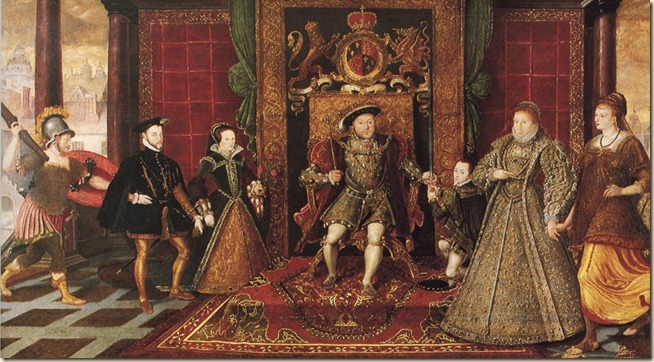 Something a little different, today. As I’m sure I’ve mentioned elsewhere on the blog, I’m a huge fan of history (if you also happen to follow Politics Reader, you will have seen that there, too). I studied medieval history at school, and have maintained a life-long interest in this period. So, I am very happy to share with you a short extract from the second volume of Peter Ackroyd’s exceptional History Of England, The Tudors (Macmillan). 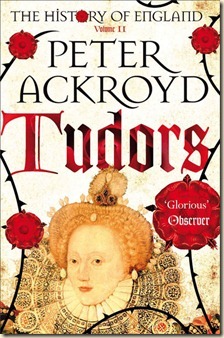 The land was flowing with milk and honey. On 21 April 1509 the old king, having grown ever more harsh and rapacious, died in his palace at Richmond on the south bank of the Thames. The fact was kept secret for two days, so that the realm would not tremble. Yet the new Henry had already been proclaimed king. On 9 May the body of Henry VII was taken in a black chariot from Richmond Palace to St Paul’s Cathedral; the funeral car was attended by 1,400 formal mourners and 700 torch-bearers. But few, if any, grieved; the courtiers and household servants were already awaiting the son and heir. When the body, having been taken to the abbey of Westminster, after the funeral service was over, was lowered into its vault the heralds announced ‘le noble roy, Henri le Septie’me, est mort’. Then at once they cried out with one voice, ‘Vive le noble roy, Henri le Huitie’me ’. His title was undisputed, the first such easy succession in a century. The new king was in his seventeenth year.

Midsummer Day, 24 June, was chosen as the day of coronation. The sun in its splendour would herald the rising of another sun. It was just four days before his eighteenth birthday. The ceremony of the coronation was considered to be the eighth sacrament of the Church, in which Henry was anointed with chrism or holy oil as a token of sacred kingship. His robes were stiff with jewels, diamonds and rubies and emeralds and pearls, so that a glow or light hovered about him. He now radiated the power and the glory. He may have acted and dressed under advice, but he soon came to understand the theatre of magnificence.

Henry had taken the precaution, thirteen days before the coronation, of marrying his intended bride so that a king would be accompanied by a queen; it was thereby to be understood that he was an adult rather than a minor. Katherine of Aragon was the child of Isabella of Castile and Ferdinand of Aragon, in whose reign Spain was united. She had come from that country in order to marry Prince Arthur, Henry’s older brother, but events conspired against her. Arthur died less than six months after their wedding, of consumption or the sweating sickness, and Katherine was left at the English court in the unenviable position of a widow whose usefulness had gone. It was said that the king himself, Henry VII, might wish to marry her. But this was unthinkable. Instead she was betrothed to Prince Henry, and was consigned to some years of relative penury and privation at the hands of a difficult father-in-law who was in any case pursuing a better match for his son and heir. Yet, after seven years of waiting, her moment of apotheosis had come. On the day before the coronation she was taken in a litter from the Tower of London to Westminster, passing through streets draped in rich tapestry and cloth of gold. A contemporary woodcut depicts Henry and Katherine being crowned at the same time, surrounded by rank upon rank of bishops and senior clergy.

Henry’s early years had been spent in the shadow of an anxious and over-protective father, intent before anything else on securing the dynasty. The young prince never spoke in public, except in reply to questions from the king. He could leave the palace at Greenwich or at Eltham only under careful supervision, and then venture into the palace’s park through a private door. Much care was bestowed on his early education, so that he acquired the reputation of being the most learned of princes. Throughout his life he considered himself to be a great debater in matters of theology, fully steeped in the scholarship of Thomas Aquinas. He took an early delight in music, and composed Masses as well as songs and motets; he sang, and played both lute and keyboard. He had his own company of musicians who followed him wherever he walked, and by the time of his death he owned seventy-two flutes. He was the harmonious prince. Thomas More, in a poem celebrating the coronation, described him as the glory of the era. Surely he would inaugurate a new golden age in which all men of goodwill would flourish?

Henry was himself a golden youth, robust and good-looking. He was a little over 6 feet in height and, literally, towered over most of his subjects. It was written that ‘when he moves the ground shakes under him’. He excelled in wrestling and archery, hawking and jousting. Nine months after the coronation, he organized a tournament in which the feats of chivalry could be celebrated. He rode out in disguise, but his identity was soon discovered. He had read Malory as well as Aquinas, and knew well enough that a good king was a brave and aggressive king. You had to strike down your opponent with a lance or sword. You must not hesitate or draw back. It was a question of honour. The joust offered a taste of warfare, also, and the new king surrounded himself with young lords who enjoyed a good fight The noblemen of England were eager to stiffen the sinews and summon up the blood.

When he was not master of the joust, he was leader of the hunt. He spoke of his hunting expeditions for days afterwards, and he would eventually own a stable of 200 horses. Hunting was, and still is, the sport of kings. It was a form of war against an enemy, a battleground upon which speed and accuracy were essential. Henry would call out ‘Holla! Holla! So boy! There boy!’ When the stag was down, he would slit its throat and cut open its belly before thrusting his hands into its entrails; he would then daub his companions with its blood.

Older and more sedate men were also by his side. These were the royal councillors, the majority of whom had served under the previous king. The archbishop of Canterbury, William Warham, remained as chancellor. The bishop of Winchester, Richard Foxe, continued to serve as lord privy seal. The other senior bishops – of Durham, of Rochester and of Norwich – were also in place. The young king had to be advised and guided if the kingdom were to continue on its settled course. Whether he would accept that advice, and follow that guidance, was another matter.

The surviving members of the House of York were restored to favour, after they had endured the indifference and even hostility of the previous king. Henry VII had identified himself as the Lancastrian claimant to the throne. Even though he had married Elizabeth of York after his coronation, he was suspicious and resentful of the rival royal family. The essential unity of the realm was now being proclaimed after the dynastic struggles of the previous century.

The older councillors now took the opportunity of destroying some of the ‘new men’ whom Henry VII had promoted. His two most trusted advisers, or confidential clerks, were arrested and imprisoned. Sir Richard Empson and Sir Edmund Dudley had been associated with the previous king’s financial exactions, but they were in general resented and distrusted by the bishops and older nobility. They were charged with the unlikely crime of ‘constructive treason’ against the young king, and were duly executed. It is not at all clear that Henry played any part in what was essentially judicial murder, but his formal approval was still necessary. He would employ the same methods, for removing his enemies, in another period of his reign.

Henry was in any case of uncertain temper. He had the disposition of a king. He could be generous and magnanimous, but he was also self-willed and capricious. The Spanish ambassador had intimated to his master that ‘speaking frankly, the prince is not considered to be a genial person’. The French ambassador, at a later date, revealed that he could not enter the king’s presence without fear of personal violence.

An early outbreak of royal temper is suggestive. In the summer of 1509 a letter arrived from the French king, Louis XII, in reply to one purportedly sent by Henry in which the new king had requested peace and friendship. But Henry had not written it. It had been sent by the king’s council in his name. The youthful monarch then grew furious. ‘Who wrote this letter?’ he demanded. ‘I ask peace of the king of France, who dare not look me in the face, still less make war on me!’ His pride had been touched. He looked upon France as an ancient enemy. Only Calais remained of the dominion that the English kings had once enjoyed across the Channel. Henry was eager to claim back his ancient rights and, from the time of his coronation, he looked upon France as a prize to be taken. War was not only a pleasure; it was a dynastic duty.

Yet the pleasures of peace were still to be tasted. He had inherited a tranquil kingdom, as well as the store of treasure that his father had amassed. Henry VII bequeathed to him something in excess of £1,250,000, which may plausibly be translated to a contemporary fortune of approximately £380,000,000. It would soon all be dissipated, if not exactly squandered. It was rumoured that the young king was spending too much time on sports and entertainments, and was as a result neglecting the business of the realm. This need not be taken at face value. As the letter to the French king demonstrated, the learned bishops preferred their master to stay away from their serious deliberations.

There were in any case more immediate concerns. Katherine of Aragon had at the end of January 1510 gone into painful labour. The result was a girl, stillborn. Yet Katherine remained evidently pregnant with another child, and the preparations for a royal birth were continued. They were unnecessary. The swelling of her belly subsided, caused by infection rather than fruitfulness. It was announced that the queen had suffered a miscarriage, but it was rumoured that she was perhaps infertile. No greater doom could be delivered upon an English queen. She disproved the rumours when she gave birth to a son on the first day of 1511, but the infant died two months later. Katherine may have been deemed to be unlucky, but the king would eventually suspect something much worse than misfortune.

Henry had already strayed from the marriage bed. While Katherine was enduring the strains of her phantom pregnancy in the early months of 1510, he took comfort from the attentions of Anne Stafford. She was one of the queen’s ladies-in-waiting, and was already married. She was also a sister of the duke of Buckingham, and this great lord was sensitive of his family’s honour. Anne Stafford was sent to a nunnery, and Buckingham removed himself from court after an angry confrontation with the king. Katherine of Aragon was apprised of the affair and, naturally enough, took Buckingham’s part. She had been shamed by her husband’s infidelity with one of her own servants. The household was already full of deception and division. Other royal liaisons may have gone unrecorded. Mistress Amadas, the wife of the court goldsmith, later announced the fact that the king had come secretly to her in a Thames Street house owned by one of his principal courtiers.

Peter Ackroyd’s The Tudors is out now.