Guest Post: “How a Cult Tried to Get Me” by Koethi Zan

Koethi Zan is the author of The Never List, which was published this week by Viking. To celebrate the release of the novel (and in advance of the review), here is a guest post from the author… 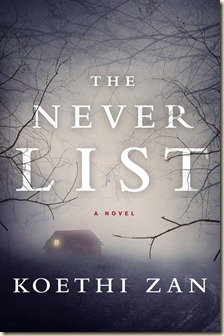 When I was eighteen years old, my college roommate and I were lured into a cult. It isn’t what you might imagine. We didn’t move to a commune somewhere in Texas with some charismatic leader who had a cache of weapons and multiple wives. They were much too sophisticated for that. They drew us in slowly with very innocent “study sessions” that were part self-help, part group therapy, and part meditation class.

It started with my college boyfriend’s parents who had been involved with this “philosophy study group” for many years. They urged my boyfriend to go so my roommate Ann and I decided we’d tag along. We were up for anything and curious about what we’d heard.

There were five of us at the first session, one of whom was a stunningly beautiful girl about my age. She had an ethereal quality about her and was very close to reaching the next “level” in the study group. I was convinced my boyfriend would end up in her group too—without me. I had to get to the higher level too, and fast.

Like many cults, this one had a mystical text, a dynamic long-dead leader, and an almost corporate organizational structure. They were practiced at the slow seduction. Their main scripture contained a bizarre and complex cosmology that made no sense whatsoever. We studied only a page or two each week, carefully dissecting its strange logic and arcane symbolism. I was getting nowhere with it.

Study sessions began with a long meditation, in which the teacher would ask us to focus on each individual body part until we felt it tingle. I had a hard time sitting still that long. Then we would work on our main objective: learning to be “present in the moment.” Each week we would leave with specific tasks to practice: upon entering a room, look at the ceiling, or eat meals using the non-dominant hand. Eventually, our sessions involved learning the art of bookbinding, which seemed a bit odd, but I mildly enjoyed that part at least. It reminded me of being in the Girl Scouts. All in all, it seemed harmless enough.

Then, just as Ann and I were getting bored with the whole thing, we were informed that we had reached a high enough level to go to a special weekend “retreat.” An important leader from New York City would be presiding. The group had bought a house that needed work, so naturally there would be “work sessions.” We were flattered. We went. 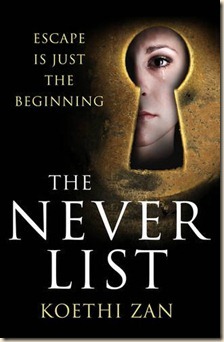 The first thing they did was set us to work scraping the floors of the house—for hours. That was a mistake. Not my cup of tea. Next we had an extensive presentation about the cosmology. I was bored out of my mind. Then after lunch, we were instructed in special “movements” at a school gym they’d rented out. We would hold out our arms and spread our legs, and then, in time with ominous chords of piano music, we would have to jump suddenly into the next position. I was starting to freak out a little.

Up until that point, no one had mentioned money to us. They were clever enough to know we’d see that as a warning sign. But back at the house that afternoon, I overheard the fancy leader from New York City pressuring a young member to make his contribution. That was just about the final straw. So when, in our next session, we were seated in rows for an hour-long meditation session, I feigned illness and was excused to the other room. I realized I had to get out of there. I tried to signal to Ann through the doorway, but she was in a deep state of meditation.

Without telling anyone, I slipped out the front door, hoping Ann would figure it out and follow me when she finally opened her eyes. She did, and we reunited back at the dorm that day to celebrate. Needless to say, we never got to the next level.

The Never List was published by Viking this week in the US (top image), and will be published in the UK in August 2013 by Vintage (second cover). Here’s the synopsis…

NEVER GET IN THE CAR

For years, best friends Sarah and Jennifer kept what they called the 'Never List': a list of actions to be avoided, for safety's sake, at all costs. But one night, they failed to follow their own rules.

NEVER GO OUT ALONE AFTER DARK

Sarah has spent ten years trying to forget her ordeal. But now the FBI has news that forces her to confront her worst fears.

If she is to uncover the truth about what really happened to Jennifer, Sarah needs to work with the other women who shared her nightmare. But they won't be happy to hear from her. Because down there in the dark, Sarah wasn't just a victim.

There were four of us down there for the first thirty-two months and eleven days of our captivity.And then, very suddenly and without warning, there were three.Even though the fourth person hadn't made any noise at all in several months, the room got very quiet when she was gone.For a long time after that, we sat in silence, in the dark, each of us wondering what this meant for her and for us, and which of us would be the next in the box.