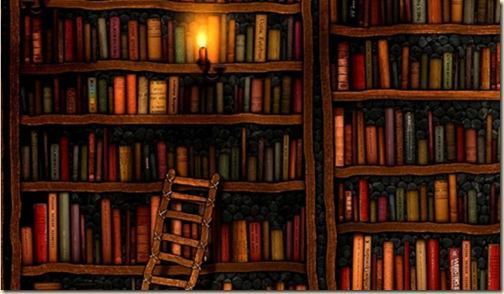 I’ve been reading a selection of short stories over the past couple of weeks, but I keep forgetting, or getting distracted from posting the reviews. So, to speed things up, I’ve compiled this selection of four reviews. Each is very different to the others, and offers something different. Not all of them were great, but each has something to offer the reader with a couple of hours to spare – either on a commute, or in between longer reads as palate cleansers. I had a lot more to say about one of them, but it is part of a much larger, decade-spanning series. 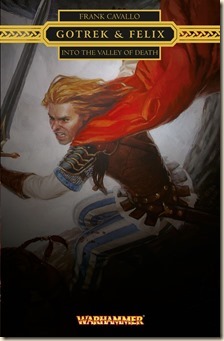 INTO THE VALLEY OF DEATH by Frank Cavallo (Black Library)

Before he ever met Gotrek Gurnisson, Felix Jaeger had a knack for getting into trouble... Risking his life to save a band of travellers from certain death, Felix finds himself drawn into a quest to retrieve a dangerous artefact from the mystical lair of a long-dead necromancer. But as danger presses in, Felix finds that he may not be able to trust his new companions. Just what is the secret of the Valley of Death, and how can Felix possibly survive it?

This is a standard quest tale, as Felix hooks up with a private party on a quest to recover a lost tome of magic from the grips of a (supposedly) dead necromancer. It was predictable that the big bad was not dead, and in fact was waiting for them. (I don’t think this is a spoiler.) In many ways – both good and not so – this story felt like a classic, early Warhammer short story. It was very conservative and within-established-boundaries in structure and construction.

What makes Cavallo’s short story (his first?) stand out for me, though, is that it’s written in very swift, focused prose. I was very impressed with the fluidity of the story, and how easy it was to slip into the narrative, whisked along from the very first page. The dialogue sometimes felt a bit stilted, though – overly formal and precise, it felt a little off, despite Draeder and Felix’s refined, wealthy backgrounds. Strangely, late in the story, Cavallo describes someone’s speech in a way that could be used for his characters’ own:

“The words were enunciated with an antiquated, formalistic diction, in the manner of a man to whom the common tongue was quite foreign.”

I couldn’t help thinking throughout the story, though, that I was pretty sure it is a massive break from the Gotrek & Felix mythology. I’ve read everything related to these two characters (including the original micro-stories that were printed in the old Warhammer Armies: Empire book), and I am 95% sure that, before he met the slayer and made that fateful oath, Felix was a coddled, waster of a student whose only action had been in fencing circles and in the bedroom. He hadn’t had any adventures. I am sure that has been very well established by Will King’s novels, and then reinforced by Nathan Long’s series contributions... (I even took to the Gotrek & Felix Facebook fan page to pose this question, and there was general agreement that this seems to break with the established continuity.)

Overall, it’s a little difficult to write much more about this. Cavallo’s approach is oddly bloodless (emotionally only, as there is a good amount of combat). It’s by no means a bad G&F story (or, “Notrek & Felix”, as someone on Black Library’s blog called it), but it lacks the old magic that King established, Long maintained excellently, and Reynolds is staying true to (in his shorter G&F work, at least – I still haven’t read Road of Skulls, yet…). The absence of Gotrek certainly is part of the problem in this regard. I think this would have worked just as well without Felix as the protagonist.

A decent example of Warhammer fiction, therefore, but not essential for G&F fans. And not if you're fundamentalist about the larger canon...

Into the Valley of Death is available as an eNovella, or as part of the Gotrek & Felix: Lost Tales anthology, which also includes Josh Reynolds’ Charnel Congress, Jordan Ellinger’s The Reckoning, and the prose version of David Guymer’s Curse of the Everliving (previously an audio drama). 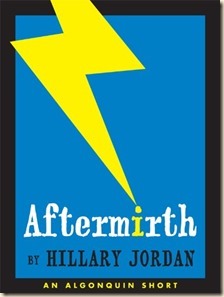 “I stopped being funny the day my wife was electrocuted by her underwire bra.” So begins Aftermirth, the story of how 31-year-old comedian, writer, and actor, Michael Larssen copes with the loss of his wife. What is horribly funny to the rest of the world is devastating to Michael, who loves his wife deeply, especially her bright, rippling, abandoned laughter, which captivated him from the first time he ever heard it. In the aftermath of her death, he loses his sense of humor, and his career along with it.

Then, after two years of mourning her, he sees an article in the paper about a factory worker named Julio Santiago who fell into a giant vat of dough and was kneaded to death. For reasons Michael doesn’t understand, he decides to go to the man's wake. There he meets and bonds with Julio’s 29-year-old daughter Elena, a law student who is reeling from her father’s unexpected and preposterous death.

Three months later, she calls him out of the blue and suggests that the two of them drive to North Carolina to speak with another survivor like themselves Elena has found on the Internet. Their road trip is a darkly funny journey of healing that takes them deep into the heart of their grief and others', and then beyond it, to a place of peace and laughter.

An interesting, well-crafted story from the author of Mudbound and When She Woke. The story was a little strange – the deaths discussed, after all, are supposed to draw from the strangest, morbidly fascinating and humourous demises. Jordan manages to pack a fair amount into the story, and I thought she did a great job of letting us get to know her narrator (even if just a bit). He meets some interesting people, finds himself part of some strange conversations, and learns to cope with his grief. I do think this could have been expanded into a full novel, though, which would have allowed for much more exploration of the nature of grief, how people cope with it and more. (But then, I usually find that with short stories that are entirely stand-alone.) Nevertheless, Aftermirth is a darkly comic, quirky, sometimes endearing tale that explores both the absurdity and pain of death. Well worth a look. 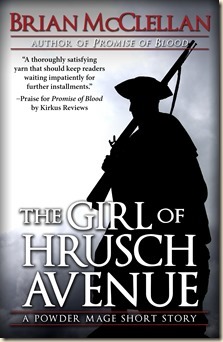 THE GIRL OF HRUSCH AVENUE by Brian McClellan

Vlora is an orphan living at a boarding school as a ward of the state. Even at her young age, she already has enemies: the Bulldog Twins, Baron Fendamere, and her own headmistress. When a strange man offers to buy her, Vlora runs away and takes to the roofs above the gunsmithies of Hrusch Avenue. It is there that she meets a boy named Taniel and begins a friendship that will change her life forever.

So, here we get some more information and background for one of the characters that hovered around the edges of Promise of Blood, McClellan’s entertaining and promising (sorry) debut. This takes us back years before the events of the first book, fleshing out a character I know I wanted to learn more about (not to mention wanting her to feature more in the story – at times, she felt like little more than a plot device). You by no means need to have read Promise of Blood in order to enjoy this, but those who have should enjoy the extra background and tale.

McClellan’s writing is very good, as in his novel, and I enjoyed seeing more of his world rounded out, even if it was predominantly a narrow-lens look at the lives of street kids. When Taniel appears, and eventually his father, we get a very good ending. The Girl of Hrusch Avenue is definitely recommended for fans of the novel, but also for readers who would like to sample his writing, characters, world and style before making the financial and time commitment for his full-length fantasy novel. I hope McClellan writes some more of these short stories. He seems to have a knack for this, too. 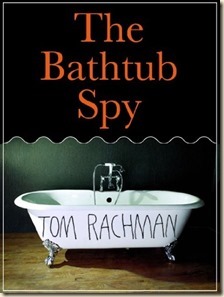 Returning to America after years abroad, Paul Tregwynt takes work at an intelligence agency near the Pentagon, translating wiretaps for decorated military officers and desk-jockey spies. But life in espionage turns strange when his boss gives him a book and an order: read this.

This is the first thing I’ve read by Rachman (who shot to success with The Imperfectionists). And it’s not bad. It’s also not really long enough to do much, which means we don’t really get to know the characters too well, and Wayne comes cross as rather odd at the end (without sufficient explanation). That being said, it’s an interesting, endearing story about bibliophilia and finding gems from unexpected places and sources. In some ways, it’s also about the potential for reading and literature to bring people together, regardless of temperament, age, life experience, and so forth.

The Bathtub Spy is well worth checking out, if you have a few minutes to kill and want to buy a Kindle Short (it’s pricing was a little weird, though – it’s the shortest of the KS series that I’ve bought, but was by no means the cheapest). It has made me really interested in reading some of the Russian literature mentioned within…

I also picked up The Imperfectionists when I bought this, as I’ve been feeling more in the mood for fiction without the speculative/fantastical of late. That’s not to say it will disappear (I love it too much), but given that my job revolves around it as well, you should expect some more thrillers, literary fiction novels, and others to feature on CR in the future. (The next two novel reviews, for example, will be Vince Flynn’s Kill Shot and Michael Chabon’s Kavalier & Clay).

In other short story news, I’ve also started Fearsome Journeys, the latest fantasy anthology from Solaris. I’ve not been very diligent about getting through it all, though – so far, I’ve read the first two stories, by Scott Lynch (excellent, fun) and Saladin Ahmed (also very good).

Anyone else read any good short stories recently?