Taking a different approach to the previous DC New 52 reviews I’ve posted up here, I’ll now review them by week of release, I think. This will mean for less clutter on the website and hopefully more streamlined reviews. Also, assume that there are minor spoilers after the break – so if you don’t want anything spoiled, just pay attention to the pre-break stuff.

[I intend to stick with all the titles I’ve enjoyed until they lose my interest. It’ll be interesting – probably only for me – to see how far I get with some of them.] 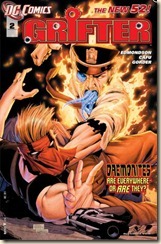 The police are looking for him. Government operatives are hunting him down. And Cole Cash can hear the voices of an alien race in his head. Escaping New Orleans will require quick thinking and a violent streak straight out of Cole’s Special Operations background – and just like that, his life will be turned upside down, figuratively as well as literally.

This title actually got better. I was pretty impressed with the introduction we were given in the first issue, and in this second instalment the action is more intense (and more imaginative), as we get to know a little more about Cole. It’s still a mystery who these demons he’s seeing really are, and what they were doing to him and also why. The issue ends with a Mexican Stand Off, and promises yet more action to come. The plot and dialogue are great and realistic, and I find myself drawn ever more into the story. The art is stunning on many pages (the fight in the diner, especially, but also the final page), drawing on a nice broad palette. Definitely a title I’ll keep following. 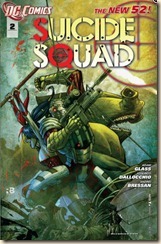 80,000 ordinary people vs. the Squad! Well, they’re not really “people.” Not anymore. With an entire sports stadium on lockdown following the outbreak of an unknown virus, Deadshot, Harley Quinn and the rest of the Squad must sneak past a military perimeter and fight their way through the infected to retrieve… “it.” What is “it”…? Brace yourself for a stomach-churning reveal as the most brutal version of the Suicide Squad soldiers on! Plus: Bring a body bag – it’s the team’s first Squad fatality!

This was a strange issue. I really liked the debut, but this didn’t grab me quite as much. It’s not bad by any means, it’s just taken a far stranger turn than I was expecting. Dellocchio and Getty’s art complements the strange events in the stadium perfectly. Glass’s plot and dialogue is also solid, and I don’t have any real complaints there. It was just a little weirder than expected. (I’m not too keen on the Shark Man, if I’m honest.) Deadshot does something seemingly stupid at one point (I think it’s important for a later issue, but… well, it was too contrived if it is, sorry to be cryptic) – this annoyed me, as he’s presented as a very rational, methodical leader-type. Seemed out of character. Harley Quinn is “cuckoo for cocoa puffs”, and quite a hoot to follow. Seriously, she’s batty. I’ll read the next issue, see if it’s going to keep going down this weird route. If it does, I’m not entirely sure I’ll stick with it, but if it’s as good as the debut issue, I’ll keep going. 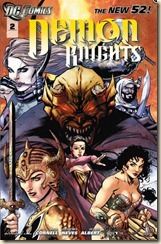 The siege that will reverberate through history to the present-day DCU begins as the Demon Etrigan and his unlikely lover, Madame Xanadu, face the Horde! What five (mostly) noble souls would be crazy enough to join them? The cover gives but a hint, and the point could well be moot by the time this issue’s done. For the Horde is armed with the magic of Mordru – including some decidedly different dragons!

Ok, this title has totally grown on me. I was semi-on-the-fence after the first issue, but after reading this it has got its hooks into me. Cornell’s writing is great – his humorous take and commentary on sword and sorcery tropes is very welcome and had me chuckling a number of times. I do like that this title is fantasy, making it stand out from the other New 52 that I’ve tried. It’s nice to get to know some of the characters a little more, too – it’s clear this is going to turn into a motley fellowship of some sort, and the team have come up with some interesting characters with a lot of potential. Neves and Albert have also created a stunning comic – it looks great, and I like the level of detail and overall style they use. A great title, which promises so very much more! 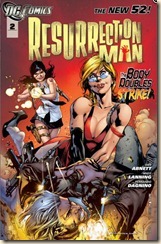 Mitch Shelley’s past remains a mystery. So when he goes looking for answers, will he find them? Not likely, when he has to contend with the bounty hunter femme fatales known as The Body Doubles.

The mystery that is Mitch Shelley continues in fine style, with yet more questions piled on last issue. Our hero’s real identity and why he keeps resurrecting remains unanswered, but we start to get hints of a far bigger game afoot. The story continues straight on from the first issue, as Mitch goes in search of his father, but is ambushed by two butt-kicking and gun-toting women who appear to know at least some of his past.

The artwork and writing are great (long-time readers will know how much of an Abnett fan-boy I am, so no surprise there). Speaking of the art, though: there are a couple of full-pages that will annoy some readers – the Body Doubles are depicted in negligee, lying on a bed together, playing with guns. A bit too teen-fantasy, perhaps? (It’s well drawn, don’t get me wrong, but it was a little too blatant an appeal to the male teen audience.) A small part of the issue, sure, but it was rather in-your-face. The rest of the art is exceptional and very dark, atmospheric, and gritty. Still a highly recommended title, in my opinion. Given the final page, I also really can’t wait until the next issue.

So, not a bad week, really. I’m definitely getting more into these comics, which means there’s now more for me to read! Wait, I have no shelves to store these on… Nuts. I’ll make it work somehow.

Next Week: Batman, Birds of Prey and Nightwing