This week we have issue two of the new Batman, Birds of Prey and Nightwing. Also this week, I decided to give Red Hood & the Outlaws a try, so I picked up the first two issues (I go into why, below). These are all Batman-related titles, too, so if you’d like to see what I thought of the first issues, check out this link.

It’s getting harder to cull the titles that I’m following, as many of the titles (overall, not just these four) have improved into their second month. There is, however, one that drops off this week. 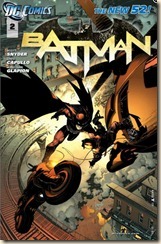 Bruce Wayne is back in the cowl, hunting a new and deadly killer in Gotham City – a killer with a vendetta against Bruce Wayne! But who is this mysterious killer in an owl skull mask? And is he the key to unlocking one of Gotham’s oldest and most terrifying secrets?

I do love Batman. For me, I think he remains one of the coolest superheroes being written today. The story that’s being woven in this reboot is also pretty interesting. We learn a little more of the Owl Court, despite Batman’s insistence that it’s an urban legend. The action is plentiful and well-rendered, and the pace is kept pretty well ramped-up throughout. I still think it’s strange that the artist basically draws all men identical, save height and haircut – their facial features are always the same, unless they’re young. Very odd, but in no way does it ruin the book. Still highly recommend this one. 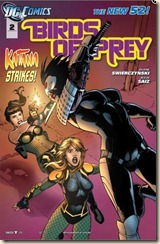 An explosion in a secure Gotham City airport terminal hurls Black Canary and Starling headlong into a nightmare involving stolen pharmaceuticals, terrorists for hire and killers in stealth suits who can appear – and disappear – at will. When Canary calls in backup, Starling’s not so sure a vengeful samurai who talks to her dead husband in a sword is the best choice.

Hm. This title started off really well in its first issue, but this second one just hasn’t lived up to expectations. Yes, there’s some good action, and the first page gives us a glimpse of Katana’s psychosis, but… after that it felt a little flat. The dialogue’s fine, and the art is great, but it just didn’t hold my attention as well as the other titles this week. It had a very ‘middle’ feeling about it, as though we’re treading water before something interesting happens (the final page was pretty good, though, and sets up next issue, but… too little, too late, perhaps?). I may still get issue three, but it’s not certain at this point. It’ll depend on my mood, I guess.

Another point: the cover artwork is totally misleading as to what actually happens in the issue. This is not the first time this has happened with one of DC’s New 52. I have no idea why they do this… 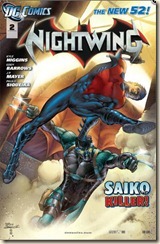 When a mysterious assassin targets Dick Grayson, Nightwing must work fast to uncover the killer’s plot before he strikes again. But as Haley’s Circus continues to perform in Gotham City, Dick finds himself torn between two lives: His old one as a circus performer and his new one as a Super Hero. And they may be more connected than he ever realized!

A strong second issue – I’m starting to really like Nightwing. It’s a little strange having him crop up in Batman as well (accused of murder there, too, no less), but it’s not difficult to keep them separated. This issue has a few more locations, as Dick travels to see the former owner of the Circus, and learns that there may be a deep, dark secret as to the true purpose of the circus and what’s going on. There’s a ton of great action in here, and Saiko’s a pretty bad-ass antagonist. I like the mystery aspect at play (something Batman titles seem to favour, which I’m fully supportive of), and it’ll be interesting to see where it goes from here. Definitely recommend people stick with this title. 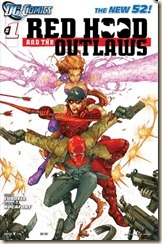 No sooner has Batman’s former sidekick, Jason Todd, put his past as the Red Hood behind him that he finds himself surrounded by a posse of modern day outlaws: Green Arrow’s rejected sidekick Arsenal, the damaged soldier of fortune. The alien Starfire, a former prisoner of intergalactic war who won’t be chained again.

As a loner, Jason has absolutely no interest in this motley crew of outlaws. So what’s he going to do when they choose the Red Hood as their leader?

Ok, so this is a title I’ve just picked up, because it was receiving such mixed reviews from all over the interweb. Nevertheless, Scott Lobdell was the fellow involved in a lot of the X-Men titles I read when I was younger, so I decided to give this a try (after I hunted down a copy of issue one, that is – it seems to be getting scarce).

However, after all that effort, I’m not sure what I think of the first issue. (I’ll admit the typo on page one was a downer.) Unlike most of the other New 52 titles, with Red Hood, I felt like I was late to a party and everyone else had already met. I didn’t know who any of these characters were, save from the synopsis from DC’s website. It wasn’t made clear in the comic who Roy was (though, again, the synopsis helped). The only character properly introduced was Starfire, although I have no idea why she’s hanging around with Red Hood. Also, she’s presented in a rather shallow, objectified way that was disappointing (especially after reading Birds of Prey). The issue does end on an interesting cliffhanger, so I’m glad I picked up the second issue at the same time…

Red Hood is already globe-trotting in an effort to find the ancient assassins behind the slaughter of those who taught him some of his darkest skills… and if Roy and Kori are going to be of any help, well, they’ll just have to tag along – whether Jason wants them to or not! 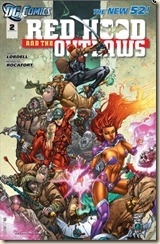 The first page gave me all the background I needed for Red Hood – simply, clearly and all within the first inch across the top of the page. Not really sure why they couldn’t have done this in the first issue – he is, after all, the ‘star’ of the title!

The flashbacks are actually pretty good, and made me chuckle a few times (the wizened old Ducra was cool – not every day you see a tiny granny hurling a former Robin about like a bag of potato chips). There are still plenty of references to things that have happened in the past, which continued to bother me – I don’t like coming in partway through a story, and even though this is meant to be a new beginning, it didn’t feel that way.

This second issue definitely improves on the first, and I got the feeling that we’re starting to see a proper story develop – the first issue, certainly when compared to this one, was clearly meant to grab our attention (albeit in a rather clunky, ‘look-at-the-sexy-alien’ kind of way), but this issue is a lot more about setting the scene for what is to come. The banter between the three teammates is fun, there are some awful-though-still-amusing puns, and generally the writing felt better than in the first issue. I’ll stick with Red Hood and company for at least one more issue.

So that’s it for this week. One down, one picked up, and two continued keepers. Next week, we get to see how All-Star Western, Batman: Dark Knight and I, Vampire develop. I have high hopes for all three, as they had some of the best opening acts. Until then.