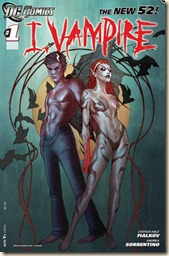 A human-vampire War is brewing, and an unlikely hero stands on our side…

For hundreds of years, vampire Andrew Stanton kept mankind safe from the horrors of the supernatural world, thanks to a truce he made with his ex-lover Mary, the Queen of the Damned. But now the truce has reached a bloody end and Andrew must do everything in his power to stop Mary and her dark forces from going on a killing spree

I’m a sucker for most things vampire, so when I saw that I Vampire was one of the titles DC was rebooting, I figured why not? Also, on the day of its release, the author was signing copies at Meltdown Comics on Sunset Blvd., which is where I’ve been buying my comics.

This is a pretty interesting title. It draws on a number of popular vampire tropes, but plays around with them and merges them rather well. For example, the vampires live among us and some desire to dominate the world, while others are content to live in the shadows. So far, so very Blade. However, this is the same world as Superman and Green Lanterns – Stanton mentions them when talking with Mary about her desire to rule – so there are some other obstacles to vampire domination.

Other characteristics: the vampires can shape-shift, which is something I’ve not actually seen for a long time; and they’re not limited to one shape either, which adds some interesting possibilities for the future.

The story is rather nicely set up, too. The narrative shows us the relationship between Andrew and Mary – the attraction and antagonism, the incompatible agendas and dreams. Fialkov has managed to pack in quite a bit of background and exposition into relatively few pages. Definitely one of the better writers for this – there have been a couple of New 52 titles that I thought didn’t offer enough for new readers. With I, Vampire, however, I didn’t feel lost and felt quite comfortable with the story.

Complementing Fialkov’s writing is Sorrentino’s striking artwork: it matches the tone of the story brilliantly – alternating between sequences in sepia-like tones, and others in deep blues and midnight tones. It’s a very attractive comic, and is very nicely put together.

As I finished the last page, I was left totally hungry for more. Really can’t wait for October 26th (when issue two is published)! Easily one of my favourite comic titles thus-far. Definitely recommended for comic and vampire/horror fans.