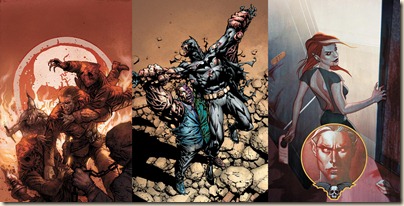 A smaller selection this week, as my chosen titles shrink further. These three DC titles had great debut issues, so I was very much looking forward to getting my hands on them.

In addition to All-Star Western, Batman: Dark Knight and I Vampire, I also picked up the first issue of new Vertigo title, Spaceman (it’s only $1, which is a pretty low-risk price for something to try out). Some mixed impressions, this time. 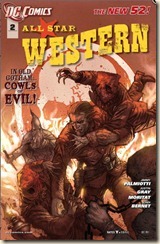 What happens when a psychologist and a sociopath have to work together to track down Gotham City's first serial killer? They'll soon find that crime in the big city runs deeper than its foundations, and it's all mapped out in the mysterious Crime Bible – that is, if they don't kill each other first.

Plus: No zombie is safe in the Wild West when Lazarus Lane summons the demon known as El Diablo!

Damn. After a really good first issue, this one felt a little like we were entering a holding-pattern. We’re given more information about the cabal that seeks to take over Gotham in the name of a “religion of crime”. It’s a pretty interesting concept (there’s even a Crime Bible, apparently). This could develop into something very interesting, but this issue didn’t really offer much more than exposition. It’s good exposition, but I’m starting to wonder if this one will work better as a collected volume of multiple issues, rather than individual monthly episodes. The art is still as gnarly as before (maybe more so?): I’d prefer it a little cleaner (I grew up with the clean lines of Marvel comics, after all), but I think the story’s good and Moritat and Bernet’s style does kind of suit the aesthetic, I suppose.

The extra story was annoying. I would have much preferred more of the main story, rather than some weird Native Indian zombie thing. It looks like this will be a frequent inclusion, however – just as Men of War has another similar title included (although, as with Men of War, it’s clear why the ‘bonus’ story isn’t a title in its own right…). 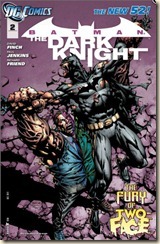 Something sinister surges through Arkham Asylum, and Batman finds himself bombarded by his greatest foes. Bigger, meaner, and more powerful than ever before, the inmates of Arkham Asylum run rampant as the entire Bat Family struggles to keep the walls from falling down, unleashing Gotham City’s worst criminals on the unsuspecting population

This was a good issue, if a little uneventful. Well, maybe “uneventful” isn’t the right word – it didn’t really feel like it was moving the story forward enough. It’s pretty brutal and graphic, though: lots of violent combat, from which there was barely a pause. It’ll be interesting to see what comes of the title, as we’re still not clear who has let the maniacs loose on Gotham and how they’ve been stripped of their fear. Very much felt like a transition episode, which poses more questions for the reader, without really giving us anything to grab hold of. I do like the writing, though – the dialogue is good, and I like the overall way that Batman, Alfred and Commissioner Gordon have been rendered (visually as well as textually). This is probably the more ‘adult’ Batman title, although Batman is also pretty dark and brutal. Still badass, mind. 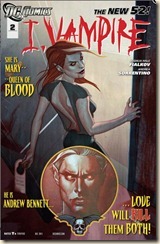 True love becomes divine hatred between the Queen of Blood and Andrew, as her vampires begin their attacks across the country. Their past behind them, they find themselves ready to battle to the death... If those feelings really are all gone. Surrounded by swarms of bloodthirsty vamps, Andrew must confront his immortal beloved in a blood-soaked battle he can't win.

This title continues to be one of the most interesting. The artwork is deliciously gothic, and I love the whole aesthetic that Sorrentino has created for Fialkov’s interesting story. There are so many panels and whole pages that would look great as a poster. Very atmospheric.

This issue is from Mary’s perspective, where the first was from Andrew’s. Fialkov has managed to give them both distinctive voices and world-views. It’s pretty grim stuff, going beyond many of the vampire tropes, and certainly moving in a completely different direction from the popular teen-vampire-romances that are most popular today. Mary has started her campaign to rule, and has whipped up many of her fellow vampires into a frenzy of bloodlust. It’s interesting to see them as freedom fighters, or insurgents, fighting against the oppression and self-imposed inferiority.

This is dark, gothic and bloody marvellous. I can’t wait for the next issue (these single issues really aren’t long enough for me…). 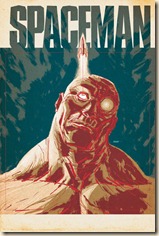 Set in a post-apocalyptic near future, SPACEMAN tells the story of Orson – a hulking, lonely loser who spends his days collecting scrap metal and dreaming of the star-trekking life he was promised.

That is, until he finds himself at the center of a celebrity child kidnapping case. Seeing his chance to be a hero, Orson takes matters into his own hands... but will his actions only cause more heartbreak?

The creative force behind Spaceman also brought 100 Bullets to the comic-reading public, a book that I’ve heard expanded the possibilities and boundaries of crime comics at Vertigo. I bought this on the recommendation of the store clerk in New York’s Forbidden Planet (just south of Union Square). And I really wish I hadn’t…

To put it bluntly, I thought this was terrible. I cannot think of a single redeeming feature – the writing is subpar, the artwork is awful, and I just really couldn’t give a monkey’s about anything in here. Without the synopsis, I couldn’t have told you what was going on. Absolutely will not be picking up the second issue.

So that’s it for this week. Next week there won’t be a New 52 round-up, as all three of the titles I tried from that publication round I’ve dropped (Action Comics, Green Lantern and Men of War).

I must say, I’m really enjoying getting back into comics (as I’m sure is obvious, given just how many reviews I’ve been putting up here this past month or so). There’s now another section of bookstores that I visit on my frequent trips, and a wealth of new reading material for me to check out. Of particular interest at the moment would be a look at some of Joss Whedon’s graphic novels – Astonishing X-Men (which has since been taken over by Warren Ellis, I believe), and Fray (a future look at the Slayers) have caught my eye.

If you have any recommendations, please feel free to leave them in the comments.