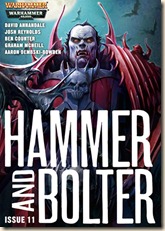 Hammer & Bolter is Black Library’s monthly eBook, offering short stories, interviews and excerpts of upcoming Warhammer and WH40k fiction. It is also where new authors showcase their work. In Issue 11, there were two stories that really stood out for me, so I’ve decided to review them here.

The first is Aaron Dembski-Bowden’s Shadow Knight (a prequel to his Night Lords series), which showcases his exceptional skill as a writer once again. The second is a tale from newcomer David Annandale, which offers an original take on a popular Chaos trope, done very nicely indeed.

In the future, I’ll do similar-style reviews for any other stories that strike me as particularly noteworthy.

In this story – a prequel to Soul Hunter – the Night Lords of First Claw are on the hunt, scavenging in a space hulk. A Blood Angels vessel has happened upon them, and Talos and his companions decide to make sport of the loyalist Astartes.

Given that one of Talos’s weapons is the Blood Angels’ relic power sword, Aurum, the Sons of Sanguinius have always had a strong desire to defeat him and repossess the sword – it would appear that retrieving the sword has become an initiation rite for some Blood Angels scouts.

The story starts in an interesting way – one of the nice things about Aaron DB’s writing is that he frequently tries out new structural approaches, never relying on just one format. For the first half of Shadow Knight, we get what amounts to a bio of Talos’s fighting life, presented in snippets and vignettes of violence – we see his evolution from child to leader to traitor, from human to Astartes. It’s very well done, and it continues to amaze me how fresh everything Aaron writes feels – Talos and First Claw have featured in a number of short stories and two full-length novels (with another on the way), and yet there is still plenty of information and background still unwritten.

The bizarre camaraderie of First Claw is on display again – their sense of brotherhood, millennia old, remains strong, but they also hate each other (a least a little). Their martial training and bond means they work exceptionally well together, even as some succumb to corruption more than others. The dynamic of the squad is great to read, and engenders a fondness for the characters – which is doubly impressive when you consider the fact that the Night Lords are basically superhuman terrorists.

The story is action packed, but really not a whole lot happens (it’s too short, in my view, but then I’m very demanding). Nevertheless, it’s a nice slice of Night Lords action to tide us over until Void Stalker (the final Night Lords novel) is published next year.

If you ever wanted a taste of Aaron DB’s trademark writing style (which is flawless, in my opinion), then Shadow Knight is a good place to get it.

“The Carrion Anthem” by David Annandale

A musical doom comes to a quite Imperial world

Annandale is a new author to the Black Library stable, and in this story he’s approached a popular Chaos tactic in an original and innovative way.

Music has been the chosen tool of Chaos in at least a couple of other stories, but in this short, the author has adapted the idea in two ways that make it stand out. For one, it’s not a Slaanesh-worshipping force that is making use of music; rather, it is Typhus, champion of the plague lord Nurgle who has concocted this scheme.

Annandale’s writing is very good – the narrative is in a slightly detached style, which works rather well for this story. I also really liked the inventiveness on display here – our main protagonist, for example, does not succumb to the Carrion Anthem because he has amusia (a musical disorder that means you derive no pleasure from music, nor can you create any).

An interesting introduction to this new author, I’ll be keeping my eyes open for any more of his work.