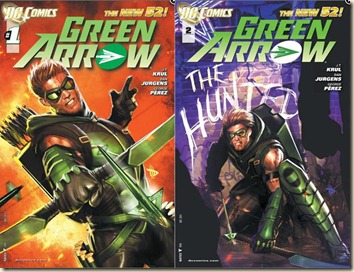 Green Arrow is on the hunt. Driven by inner demons, Ollie Queen travels the world and brings outlaws to justice… by breaking every law.

In Issue 2, Super Hero executions will now be televised! After taking down members of a “celebrity” gang – privileged, decadent teens who buy their powers and stage fights with unsuspecting victims – Green Arrow finds himself in the crosshairs of the entire team! It’s Ollie Queen vs. a dozen thrill killers while the world watches – live!

I picked up these two issues because Green Arrow is one of DC’s characters that I’m vaguely familiar with already – because of Smallville, which I know isn’t exactly canon. I thought he was an interesting character in that show, so figured he’d be as good, if not better, in his own comic. Turns out, he was only ok.

These two issues are quite interesting, but I wasn’t as enamoured with them as I had hoped. The story is fine, and moves at a decent pace, but it also lacks subtlety – Green Arrow spends a lot of both issues condemning celebrity culture in just a little too blunt a fashion. Celebrity culture is, of course, insane. But I know this, and didn’t need it spelled out for me quite so much across two issues (particularly the first, which started to get overly preachy). The protagonist just comes across as far too sanctimonious.

The art is really nice, though. Strong and bright colours, and vivid compositions. Very striking. I’ve been really impressed with all of the artists involved in the DC re-boot. Some really stunning pieces have been created.

Not much was made of the fact that these villains buy their powers – we’re just told this is the case. It would have been interesting to see a little more of how this worked. The bad guys are interesting, and they are certainly portrayed as fame-hungry brats, but we’re not really told anything else. If the preaching had been toned down, then maybe we could have got a little more in the way of story?

There’s really not much more to say about the title. I’m sure it’ll be fine as the story continues, but at the moment it really didn’t stand out for me. I might consider checking out a collected edition further down the line, but for now I don’t think I’ll be buying the monthly issues.

Posted by Civilian Reader at 4:42 PM