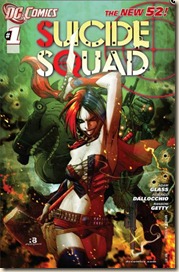 Deathrow inmates given a second chance?

They’re a team of death-row super villains recruited by the government to take on missions so dangerous – they’re sheer suicide!

Harley Quinn! Deadshot! King Shark! Defeated and imprisoned, they’re being interrogated about their mission – and about who’s pulling the strings behind this illegal operation. Who will be the first to crack under the pressure?

It’s a bit difficult to review this one without spoiling it all, so this is a very short review. An interesting title with not your usual ‘heroes’ at the centre of the action. Lots of potential.

We are introduced to the team and how they came to be collected together as the eponymous squad. I’m not familiar with any of these characters from before, but I gather they are villains from other DC titles (Deadshot, for example, was apprehended by Batman).

It’s a very functional issue, laying down the groundwork for the rest of the series, and I think it does a very good job of introducing us to the characters and even giving us the first glimpse of what their characters are. It ends on an interesting bombshell, too, so I will definitely be picking up the next issue.

Rudy’s artwork is solid throughout, and none of the panels or pages were flawed as far as I could tell. Lots of shading and shadows used, and a generally eye-catching style.

An interesting title. I wasn’t sure quite what to expect, but I rather enjoyed it. It’ll be interesting to see if Glass manages to find a good balance between incorporating the psychotic and sociopathic tendencies of his protagonists into a story that maybe sees them find a form of redemption in their new purpose. Or, maybe, we’ll get something very different. Either way, I really want to find out.

Definitely a title I will be following.

Posted by Civilian Reader at 2:41 AM