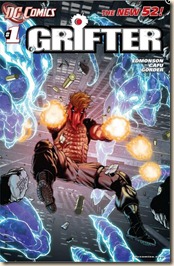 Ex-black ops agent Cole Cash is a charming grifter that few can resist. And yet he’s about to be branded a serial killer when he begins hunting and exterminating inhuman creatures hidden in human form – creatures only he can see!

Can the biggest sweet talker of all time talk his way out of this one when even his brother thinks he’s gone over the edge?

Another title and character that is entirely new to me, and another from the “Edge” range of DC comics. The first issue doesn’t give too much away, but it kicks off an interesting premise and some enticing mystery.

The timeline of the narrative is split between the ‘present’ and past. We start off with Cole Cash on a plane, and the voices are starting to talk to him. He doesn’t fully understand what is going on (and still doesn’t at the end of the episode), but it’s clear he’s hearing things nobody else is. As events on the plane take a deadly turn, the reader is left wondering how much of Cole’s apparent madness is real or the paranoid delusions of a man pushed to the edge.

The main characters are introduced, and we are given a couple of tantalising hints as to what is going on and what happened to Cole to give him the ability to hear the voices of some strange semi-transparent blue entities who appear to be up to no good. It will be interesting to read more about this, and to see how Edmondson develops the story in the future.

The art, by the mysteriously-named CAFU is great – a nice mix of sharp and rough, varied colours and some great panels and larger pieces (particularly the composition of a handful of sunset panels, which were very nice indeed).

Grifter is another teasing introductory issue. A couple of other titles have, in my opinion, done a better job of packing in a considerable amount of story into a relatively short amount of space (Resurrection Man and All-Star Western, particularly). Some might be put off by the lack of exposition, but I think Edmonson has done a good job of writing a first issue that gives us just enough mystery to hook us, ensuring that we’ll check out at least the second issue.