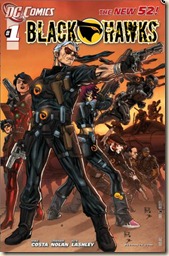 Welcome to a world waging a new kind of war that’s faster and more brutal than ever before. It’s fought by those who would make the innocent their targets, using computers, smart weapons and laser-guided missiles. The new enemy hard to find – and closer to home than we think.

Between us and them stand the Blackhawks, an elite force of military specialists equipped with the latest in cutting-edge hardware and vehicles. Their mission: Kill the bad guys before they kill us.

In the first issue of Blackhawks, we are introduced to the eponymous UN-sponsored defence force. We’re dropped right into some action, which is good – no mucking about with unnecessary exposition.

That is, until the action stops, at which point the momentum plummeted. It’s an interesting premise, but one that is maybe suited to a longer medium – in the short space of a single issue, it’s a little difficult to find a good balance between action and character development.

Lashley’s art is of a rougher style, not quite as crisp as some of the other artists working on the New 52 titles. It’s good, but I must admit that it’s not my favourite.

The issue finishes with some hints of how things could develop in the future, but I’m not sure that my interest has been piqued enough to get the second issue. We’ll see. If it’s a quiet week when it’s out, I may pick it up, but at the moment I’m not feeling this one. It could just be that it would work better as a collected book, with all the issues together – giving us a longer and more in-depth story.

Posted by Civilian Reader at 4:08 AM