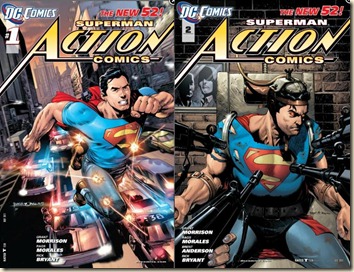 Not bad, but not brilliant, either…

Action Comics is, according to DC’s website, the “cornerstone” of the DC universe. Superman is not what you may know from other titles, movies or TV. He’s new to Metropolis and struggling as a reporter. The US military and Lex Luthor are hell-bent on capturing him and learning what they can about and from him. In the second issue, Superman finds himself in a compromised position.

So. Grant Morrison. I don’t have a very good history with liking his writing so far. (Some readers will remember I read All-Star Superman and New X-Men in an attempt to get back into comics earlier this year.) With the first two issues of Action Comics, I still don’t understand the hype.

I should state from the start that Rag Morales is a great artist – every page is visually impressive and attractive. The style is clean, fresh, and varied in tone.

The overall story is kind of interesting, as it takes us back to when Superman is not world-famous – in issue one, he is still something of a mystery to the US government and the population. The former want to study him and extract the secrets of his abilities, while the latter are just happy to have a champion on their side. The story opens with a rather blunt indictment of the difference between rich and poor justice, before the greater story kicks off. Superman is not as invulnerable as we might be used to (he has visible injuries, can be stopped and so forth), which certainly makes him more interesting. One gets the impression that his powers are only just developing. He also seems slightly cocky, which was unexpected.

The second issue sees Superman more vulnerable than I’ve ever seen him without the debilitating influence of kryptonite. The cockiness, or “swagger” as Morrison calls it in the bonus material included with issue two, is an interesting incorporation.

So what don’t I like about Action Comics? Mainly, it’s the dialogue in the first issue, which is the same problem I had with All-Star Superman and New X-Men. Put simply, I think it’s just not very good: stilted, canned, slightly fake-seeming or contrived. The dialogue improves immeasurably in the second issue, so I’m glad I stuck with it for one more issue. This problem surprises me so much, given Morrison’s stellar reputation – it put me off comics almost completely in Spring (All-Star Superman was, for me, near unreadable). Now that I’ve read a load of the New 52 titles (far more than I was actually expecting to read), I know that it’s perfectly possible for comic dialogue to be realistic and rather excellent in some cases.

Will I keep reading Action Comics? I really don’t know. I like the ‘powered-down’ Superman, and even the swagger that Morrison has given him. The story looks like it could end up being quite interesting, even though it looks like it’s going to involve intergalactic intrigue and players (I know Superman’s an alien, but I really do prefer it when they don’t go overboard with aliens, multiple-dimensions and things like that). But, ultimately, I think I’m just not as interested in Superman as I am Batman and many of the titles in The Edge and The Dark collections that I’ve recently discovered.

Posted by Civilian Reader at 7:25 AM