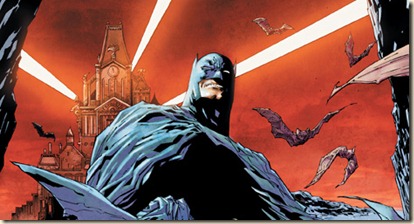 A look at four of the eleven new Batman titles

Batman is the DC character I’m most familiar with – largely because of the movies, it’s true, but I think I may have read a couple of issues when I was younger. So, with the re-boot of so many Batman-related titles, I decided to pick up a selection to get reacquainted with the characters and the setting. I stuck quite conservatively to two specific Batman titles, and two ‘spin-offs’.

Originally, I’d intended to just get The Dark Knight, but when I was in Meltdown Comics, I was told that Batman and Nightwing work together really well – so I thought why not. I chose Birds of Prey again based on a recommendation from Steve Aryan. Sadly, Detective Comics #1 was completely sold out – Tony Daniel’s cover artwork for which is at the start of this post. (I’ll try to pick up a copy when it’s re-printed in the next couple of weeks.) 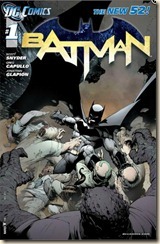 A series of brutal killings hints at an ancient conspiracy, and Batman learns that Gotham City is deadlier than he knew.

This is a reboot with some of the back story remaining – for example, we don’t see an origin story, although it is alluded to in a speech Bruce Wayne gives. Also, there are two former Robins and what appears to be a current Robin (they are mentioned only very briefly, but I assume at least one of them features in the Batman and Robin reboot, too). Bruce Wayne is pursuing a familiar goal – the gentrification of Gotham’s worst areas, paralleled by Batman’s (far more hands-on) approach to cleaning up Gotham’s streets. There’s not a whole lot of action, but the new main antagonist is alluded to late in the issue at a crime scene.

Glapion’s art is great, although it does appear that male characters are predominantly differentiated purely by their hairstyles. Otherwise, it’s alternately broody and atmospheric for the Batman sequences and bright and colourful for the Bruce Wayne scenes. I really liked the juxtaposition of the two palettes and styles, but I must say the Batman scenes were amazing – dark and sinister, just the way Batman should be. Great stuff.

The story ends on quite a cliffhanger, one that sort of ties into the next title. The issue was quite the teaser – not offering too much, but perhaps just enough to keep people coming back for more. I’ll certainly be checking out the next issue. 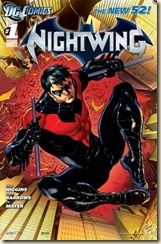 Dick Grayson flies high once more as Nightwing. As he embraces his destiny, Haley’s Circus, the big top where Dick once performed, returns to Gotham City – bringing with it murder, mystery and superhuman evil. Nightwing must confront his past, among former friends and enemies from his circus days, while uncovering a much greater evil!

Now this was an interesting title. On the first couple of pages, we’re given a little background for Dick Grayson – apparently, he’s been standing in as Batman while Bruce Wayne has been “away” (a reference totally lost on this newcomer). As Nightwing, he’s made a name for himself as a defender of the people, much like Batman has. Only at this time, someone is gunning for Dick Grayson. They synopsis lays it on a little thick – we’re not given enough in this issue to suggest there is a “much greater evil” at work. Rather, there’s a pretty huge bombshell-of-a-mystery dropped on us at the end.

As with the Batman title, there is a style-juxtaposition between the Dick Grayson scenes and the Nightwing scenes: the former has more colour and warmth, while the later is far more gritty and sinister. Barrows’ and Mayer’s artwork is great, and they infuse a great deal of dynamism into the panels. I think this is a really well-put-together title, and is visually very attractive (in a dark sort of way).

It’ll be interesting to see where this title goes, so I’ll definitely check out the second issue. Not 100% sure if I’ll stick with it beyond that, but I’m certainly intrigued to give it at least one more issue to win me over. 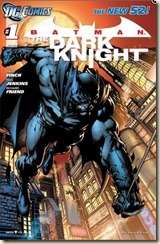 As a mysterious figure slinks through the halls of Arkham Asylum, Batman must fight his way through a gauntlet of psychos, and Bruce Wayne faces the unexpected legal ramifications of Batman Incorporated!

There were some similarities between this title and the Batman title mentioned above. We see Bruce Wayne pursuing his philanthropic endeavours, while Batman is embroiled in a break-out at Arkham Asylum (only, in this title it forms the bulk of the action in the second half of the comic). The tone of the story is darker than Batman, and perhaps is aimed at a slightly older audience? It’s difficult to tell, really, as Batman also featured some pretty savage imagery.

I really like the art style in this title, more than the other two Batman titles up to this point. Really clean, with occasional exageration of features (muscles, etc.) great atmospherics and use of darker palette. 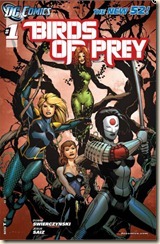 One is wanted for a murder she didn’t commit. The other is on the run because she knows too much. They are Dinah Laurel Lance and Ev Crawford – a.k.a. Black Canary and Starling – and together, as Gotham City’s covert ops team, they’re taking down the villains other heroes can’t touch. But now they’ve attracted the attention of a grizzled newspaper reporter who wants to expose them, as well as a creepy, chameleon-like strike team that’s out to kill them.

This is a totally new title for me, having never heard of these characters before I saw it mentioned in the list of new titles. Once again, it’s a recommendation from Steve Aryan (who really does know what he’s talking about – if you’re interested in comics, check out his reviews and follow him on twitter).

Bit of a weird choice for the cover, as two of the characters featured on it don’t appear in the issue (according to DC’s Birds of Prey page, they appear in the next couple). The story gives us a nice introduction to Black Canary and Starling, who are rather cool. Certainly two of the strongest female characters I’ve read in a while. The dialogue is great, and I really liked the way the story was structured – combining the narrative with some great artistic choices and compositions, this is a very cool first issue. I’m still not 100% clear on what the deal is with these characters, so I hope they fill in a little more backstory over the next couple of issues – without reducing the action, though: this issue has some great action throughout.

Really enjoyed this title. I’m not really sure how this ties in with Batman, but disregarding this, I think this is definitely a title people should be checking out. Will certainly be reading the next issue when it’s published.

Turns out, Duane Swierczynski is the writer of the recent thriller Fun & Games, which has received quite a bit of buzz around the interwebs. After reading this, I’ll be interested in checking out his prose work (will take a look on Amazon, see if it’s available as Kindling). Expect a review at some point in the not-too-distant future (my to-be-read pile has expanded exponentially in the last couple of weeks).

So how do these new Batman titles live up to expectations? Well, I realise that I really like the darkness inherent in the Batman character and Gotham city. These titles offered some pretty grim and brutal stories and artwork, which is very different from my experiences with some of DC’s Superman titles, which always felt limp and lacked much of an impact (All-Star Superman really didn’t do it for me).

Batman enjoys a wider existing audience, I think, due to the considerable success of Batman Begins and The Dark Knight. Because of this, when reading these titles I was not arriving completely unfamiliar with the setting, characters and themes at play. Certainly Batman and Dark Knight will be great starting points for anyone who loved the movies and wants more. The other two titles were less familiar, so maybe get to these after you’ve read a little more.

I enjoyed these a lot more than I was expecting, tapping as they did into the darker Batman mythos that will be familiar to many readers (new and old) from the latest Nolan-helmed movie version of the character and world. A solid four titles, and all of them were interesting enough to make me want to read at least one more issue. Which, ultimately, is what I wanted to know.

I only regret that I wasn’t able to get a copy of Detective Comics #1, because it’s apparently excellent. Hopefully I’ll be able to pick it up when it gets a second printing (or, at the very least, if they do a collected edition).

So, after reading these four comics, I think it’s safe to say that I still think Batman is cool as hell.

Posted by Civilian Reader at 4:02 AM