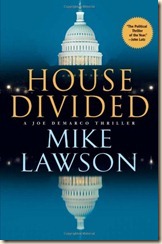 A Rogue General, Illegal Wire-Taps, and DeMarco’s in the Middle

With his boss out of commission, Joe DeMarco is on his own, a sacrificial pawn in a lethal game between a master spy and a four-star army general.

When the NSA was caught wiretapping U.S. citizens without warrants, a scandal erupted and the program came to a screeching halt. But the man who spearheaded the most sophisticated eavesdropping operation in history wasn’t about to sit by while his country sleepwalked into another 9/11. Instead, he moved the program into the shadows. So when the NSA records a rogue military group murdering two American civilians, they can’t exactly walk over to the Pentagon and demand to know what’s going on. That doesn’t mean their hands are tied, however. As the largest intelligence service in the country, both in money and manpower, they have plenty of options — mostly illegitimate.

DeMarco learns all too well just what the NSA is capable of, but he doesn’t like being used…

I’ve been a fan of Lawson’s DeMarco series ever since I read The Inside Ring. House Divided is the sixth book in the series, and it is quite possibly the best yet. Certainly a series that deserves far more attention than it receives.

The novel opens with the unauthorised interception of radio chatter within the United State. The NSA, legally prohibited from eavesdropping on internal communications in the US without a warrant, has caught something big. Something very big: the assassination of an American citizen by what appear to be covert operatives. But, without that FISA warrant, team leader Claire and her boss Dillon don’t know how to proceed. Luckily for them, the deceased is related to Joe DeMarco, the Speaker of the House’s personal investigator.

House Divided finds DeMarco a little adrift to start with. His boss, Speaker Mahoney, is currently incapacitated and in hospital, and therefore unable to give DeMarco instructions. This appears to be a mixed blessing for DeMarco: he’s spending his time quietly improving his golf game and minding his own business, but also getting just a little bit bored. Until, that is, he discovers that his cousin has been murdered. The story spun by the FBI just doesn’t cut it for DeMarco, so he goes digging. And that’s when things start to get hairy…

In truth, it took a while before DeMarco came into the story, but this had no detrimental effect on the story. There’s a lot of excellent groundwork, during which Lawson has perfectly incorporated the wire-tapping issue into a thriller narrative – and I do mean perfectly. Even though I followed the real life events that inspired this angle, I never once felt bored or like I was reading something old. The characters Lawson has created for this novel are also great and varied, which certainly helped make the story more interesting, too.

The novel is not only about the wire tapping. It is also an examination of misguided patriotism, fanaticism and narcissism. These are not new themes for thrillers to touch upon, but Lawson keeps it fresh and original through his skill as a writer, the characters involved, and also the quality of the story he’s created.

I’ve mentioned them twice already, but Lawson’s characters really do deserve lots of attention: they are just so very real. Everything action and snippet of dialogue feels natural and unforced. They are believable, while retaining originality – yes, a couple of characters are familiar to thriller fans (particularly the characters who work at the NSA and Pentagon), but Lawson tweaks them just enough to make them seem wholly new. Dillon, the head of the NSA’s clandestine operations, is a brilliant eccentric. General Bradley is fiercely patriotic, yet misguided in his approach to protecting his nation. John Levy is a tragic hero, of sorts, whose past has been manipulated by another. DeMarco is caught in the middle, feeling awkward that he must deal with the estate of a cousin who really didn’t think much of him, and his sense of justice and objection to being manipulated. The motives behind the characters’ actions are never black-or-white; there are shades of grey to every decision and policy.

The novel’s pacing is very quick, and I got through it rather quickly. That being said, the novel retains a leisurely and unhurried pace at the same time – it never felt rushed.

Early on in the novel, there are some amusing observations and grumbles about official Washington’s working practices (HR guidelines perhaps designed to hinder than help, that sort of thing), but as the novel gets going, events don’t really allow for much more of this.

Fast-paced, realistic, and featuring a great protagonist, this series just keeps getting better and better. One of the best thrillers of the year, if not the best.

Posted by Civilian Reader at 6:20 AM