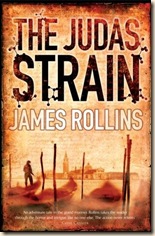 Secrets buried in jungle ruins, hidden in Vatican store-rooms, and an angelic language inscribed on an Egyptian obelisk… Things just keep getting more interesting for the Sigma Force, a sort-of paramilitary wing of DARPA, made up of highly educated (usually) ex-military types who are routinely dispatched around the globe to fight against looming scientific threats to civilisation, humankind, and so forth. To top things off, their nemesis, the shadowy criminal organisation known as the Guild, is after the same answers they are, only with far less altruistic motives, using far more brutal methods.

The Judas Strain surrounds the mystery of the contagion that afflicted Marco Polo’s crew when he returned from China, and the cryptic last line of his account (“I have not told half of what I saw”). It seems as though a super-virus is resurgent, reintroduced into the biosphere by a tsunami in East Asia, turning once-benign bacteria and organisms into lethal adversaries to everyone and everything.

Like all of Rollins’ novels, they are global in scope – the action takes place pretty much in all four corners of the globe (well, three of them, at any rate): we start in Venice, then on to Christmas Island, historic Turkey and Southeast Asia. Commander Pierce, joined by Vatican’s archive prefect Vigor Verona, and disgraced Guild operative Seichan, embark on a treasure hunt with truly world-threatening implications.

Filled with plenty of action, the occasional splash of light humour, great attention to detail (scientific, especially), and a well-developed skill at penning plots that will keep the reader with you (while suspending some belief), The Judas Strain is an entertaining action/adventure read that will, after just a slightly slow start, entertain you to the end.

Rollins is able to keep things interesting, writing the science much like the writers of the TV series House (I recognise necrotizing faciitis from the show…), giving enough to make it realistic without descending into turgid, dense over-explanation that would just bore the vast majority of readers, but still enough to ensure realism. The characters are believable and well-drawn, with only slightly over-done romantic feelings between a handful of the couples (I don’t know why, but all thriller writers make their characters overly emotional and soppy, when it comes to love interests - this especially means you, James Patterson...).

In an over-populated genre – and one that often can bore to tears as you read effectively the same story over and over – James Rollins stands out as an original voice, leading the pack. With the likes of Matthew Reilly and (early) Clive Cussler, you know that any book by James Rollins is going to be a thoroughly entertaining, action-packed read. As mentioned, this one is a little slower than normal to kick off, but once it does, the plot pulls you along with it, each thread of the story complimenting the rest, eventually pulled together in a very satisfying finale.

Interesting characters and an intriguing premise, all woven together by an author who really knows his business. Great fun.

Posted by Civilian Reader at 9:17 PM