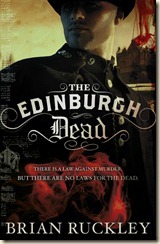 Edinburgh 1827. In the starkly-lit operating theatres of the city, grisly experiments are being carried out on corpses in the name of medical science. But elsewhere, there are those experimenting with more sinister forces.

Amongst the crowded, sprawling tenements of the labyrinthine Old Town, a body is found, its neck torn to pieces. Charged with investigating the murder is Adam Quire, Officer of the Edinburgh Police. The trail will lead him into the deepest reaches of the city’s criminal underclass, and to the highest echelons of the filthy rich.

Soon Quire will discover that a darkness is crawling through this city of enlightenment – and no one is safe from its corruption.

This is the first of Ruckley’s novels that I’ve read, and it’s incredibly good. Dark and atmospheric, Edinburgh Dead has shades of Mary Shelley and Robert Louis Stevenson, only with a 21st Century flare. I’m really kicking myself for leaving this so late. The Edinburgh Dead is gothic, literary, and brilliant.

The novel is filled with lots of well-researched and expertly presented period colour. Early 19th Century class differences and antagonisms are a big feature of the novel. Quire’s experiences during the Napoleonic Wars and the bond between former soldiers (regardless of rank), the social ravages that plagued the city and country at the time (alcohol, unemployment)… Ruckley does a great job of evoking Edinburgh in this period.

The majority of the novel is told from Quire’s perspective, and he’s a great guide. He is driven in his quest to discover who the killer is – one gets the sense that it is not all because of his sense of duty, but also his opposition to the injustice of early 19th Century society. We learn of his history as a soldier during the Napoleonic Wars. We also learn of his softer side, when it comes to Cath, a lady of negotiable affection he developed feelings for long ago, but is forbidden to fraternise with as a member of the police force. Quire’s interactions with the other characters who enter his orbit are interesting, as each of them is varied and unique in their own way.

The pacing of the novel is pretty good, but it’s by no means fast. We have a gentle ease into the supernatural goings-on, as Quire’s investigation into a seemingly normal, albeit particularly savage, murder takes on an altogether darker and occult nature. Ruckley’s sense for horror-pacing is excellent, too – he gives us just enough to creep us out or make our skin tingle (especially when Quire’s investigation takes him to Cold Burn Farm).

Ruckley’s prose style is superb. It reminded me of Mary Shelley’s Frankenstein and Robert Louis Stevenson’s Jekyll & Hyde, updated some for the 21st Century. He manages to offer up some lyrical and poetic descriptive passages (especially when describing Edinburgh in the twilight and dawn hours). The author also has injected a nice, gentle sense of humour through the novel, that offers a sporadic levity that was welcome. For example, in an exchange between Quire and Edinburgh’s coroner:

“Sergeant, you strike me – and sound, I must say – like a man under a good deal of strain. Perhaps some rest and recuperation...”

“I’d agree with you, were it not for the fact that some folk seem set on killing me. Not the moment for a nap, I think.”

There are times when the language Ruckley has chosen is a little too much: when a passage of description goes on a tad too long, or unnecessarily ‘vintage’ terminology is used. These moments are rare, however. For the main, Ruckley has a wonderful way with words, and I do not use comparisons with Shelley and Stevenson lightly. I think he’s that good. Atmospheric and superb, he knows how to build tension perfectly.

One of the surprises of the year, I thought this was a superb, slow-burning horror suspense. Very highly recommended.

Posted by Civilian Reader at 5:28 PM