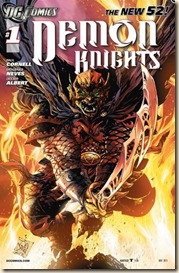 In the dark ages of the DC Universe, a barbarian horde is massing to crush civilization. It’s fallen to Madame Xanadu and Jason Blood, the man with a monster inside him, to stand in their way – though the demon Etrigan has no interest in protecting anyone or anything other than himself! It’ll take more than their own power to stop an army fuelled by bloodlust and dark sorcery, and some very surprising heroes – and villains – will have no choice but to join the fray!

Another title I knew nothing about, but came recommended by a number of people whose opinion I trust. An interesting premise, and it will be interesting to see where it’s headed.

We start with an introduction to Etrigan, who has been captured by Merlin. We learn how he came to be implanted in a human’s body (that would be Jason) as a demonic hitchhiker. We then skip ahead to another time, when an invading horde is threatening the peace. Our heroes find themselves accidentally caught in the middle of a fight they have no interest in being a part of, and any attempts at a peaceful life are quickly dashed. There are some hints and a little exposition to help settle us into the setting.

Cornell has sprinkled throughout the issue a nice, cheeky British sense of humour, which I found refreshing and unexpected. The dialogue made me chuckle frequently. The characters and dialogue are well-crafted for such a short issue. Also, the nominal bad guys have superb logic in the final couple of pages (not going to spoil it, but it’s an exceptional approach to general problem solving...).

I like the artwork throughout, and it’s rendered in a bright and eye-catching style. The cover artwork is also excellent – who wouldn’t want to read something with that image?

It’s perhaps a bit too soon to tell what to make of this title: there’s a fair bit of groundwork being laid in this debut issue, as expected, with lots of interesting hints of what is to come which shows a lot of promise. However, I’m not totally sold on it just yet – like I mention, it’s a short issue, so I would have liked a little more information for this newcomer.

I’ll certainly read the second issue when it comes out, and make a decision after that. I think this may end up being one I buy when there’s a collected edition available. It’s a pretty interesting premise, and I did enjoy it. Cautious optimism.

Posted by Civilian Reader at 11:49 PM