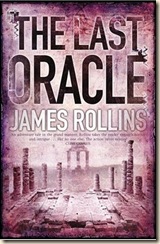 What if you could engineer an Oracle?

The novel opens with a couple of historical prologues, with only a mere hint as to why the Oracles of Delphi and gypsies are connected. In Washington, D.C., a homeless man dies in the arms of Commander Gray Pierce, the tactical leader of DARPA’s Sigma Force – a paramilitary group of scientifically trained special-ops soldiers. Before he dies, the man gives Pierce an ancient coin, a clue to a mystery rooted in ancient Greece but with links to a conspiracy and plot that could have a profound impact on the world. At the same time, a shadowy group of international scientists and experts are engineering children with exceptional talents, in the hope of producing their own prophet – one to bring peace to the world, but on specific terms that won’t please or suit all.

The scientists are still separated along old Cold War lines, as the US and Russia still attempt to be superior to the other. When Sasha, one of the children in the secret program with some amazing talents, is delivered to Commander Pierce, Sigma Force is brought in to investigate what is being done to them.

Rollins’s novels are always entertaining, and The Last Oracle certainly lives up to expectations. The plot incorporates ancient Greek history, to Nazi and Russian World War II history and conspiracies, all wrapped up in the author’s usual interest and use of modern and futuristic technology and science. Rollins injects his usual attention to detail, action and suspense, making this latest instalment in the series a great, fast-paced thriller. The characters remain interesting and well-drawn, and their emotions are kept very well in check – there is a refreshing lack of over-emoting in Rollins’s novels, a temptation many writers in this field seem incapable of resisting.

To review any Sigma novel at length would result in spoiling the twists and turns of the plot, so I shall stop here. Needless to say, The Last Oracle is another action-adventure triumph from one of the masters of the genre, filled with the author’s trademark wit, adrenalin-fuelled scenes, devious antagonists and a not infrequent disregard for the safety of antiquities. For long time fans, too, there is the return of a much-loved, recently absent character.

As the Sigma Force novels continue to improve with each new instalment, there is no fear that Rollins will go the route of Clive Cussler (whose Dirk Pitt novels are now so predictable they’re boring).

Great fun and well-written, The Last Oracle is highly recommended.