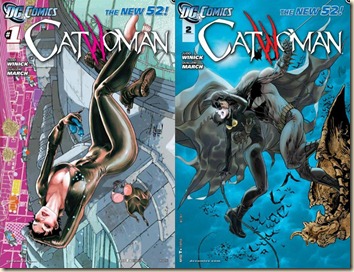 A last minute addition to my DC New 52 reads, and quite a good one, at that…

I only know Catwoman from Michelle Pfeiffer’s portrayal of the character in Tim Burton’s Batman Returns (1992). All I knew was that she is a little nutty and broken. So, without further ado, I dove right into the first two issues of the comic.

#1: Meet Catwoman. She’s addicted to the night. Addicted to shiny objects. And addicted to Batman. But most of all, Catwoman is addicted to danger. She can’t help herself, and the truth is – she doesn’t want to. She’s good at being bad, and very bad at being good.

#2: She’s a thief who lives to steal just for the thrill of breaking the law. He’s the Dark Knight, obsessively driven to battle evil with every ounce of his strength. They could keep each at arm’s length, but… they just can’t seem to help themselves.

In the first couple of pages some uninvited guests blow up Catwoman’s apartment, so she’s on the look-out for a place to squat. Lola, her fence, lets her know of a vacant penthouse suite. It takes four pages before Catwoman fully zips up her outfit, which seemed a little bit of a forced way to show off her bra, but other than that, this is a very attractively drawn and coloured issue. Zany expressions of both Catwoman and her kittens were funny. And it is nice that Lola is not the anatomically improbable typical comic female.

However, what really stands out is the story and the way Catwoman has been written.  Alfred in the second issue offers some humour as the weary parental figure, dismayed at Bruce’s choice in women.

The first issue shows Catwoman and her various psychological hang ups on full display: she’s reckless, violent, apparently in heat, and cavalier. A sociopath, certainly. In the second issue, it’s made even clearer just how nutty she is. Her unquenchable thirst for thrills and danger pits her against the Russian mob, which allows Selina to use her sexuality to exploit the mobsters’ love of beautiful and loose women of negotiable affection.

Winick has done a good job of creating a dark and twisted title in the Batman world; a psychotic protagonist who you love anyway (and worry for). The Batman/Bruce Wayne of this title is also a little more edgy, and plays up the yin and yang of his personae very well – think of Christian Bale’s portrayal in The Dark Knight and you’re pretty much there. March’s art complements the writing perfectly, adding a layer of darkness and occasional moments of (equally dark) levity.

A surprisingly good title. I may have to add this to the ‘Keep Reading’ list. Enjoyed this a lot more than I was expecting.

Posted by Civilian Reader at 5:06 AM