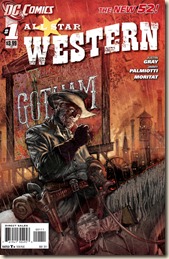 Even when Gotham City was just a one-horse town, crime was rampant – and things only get worse when bounty hunter Jonah Hex comes to town. Can Amadeus Arkham, a pioneer in criminal psychology, enlist Hex’s special brand of justice to help the Gotham Police Department track down a vicious serial killer?

I picked this up on the recommendation of Stephen Aryan, and I am very happy that I did. It’s dark, stylish, and offers a new take on Gotham City, before Batman – but certainly not before the rampant crime.

The pairing of Dr. Arkham and Jonah Hex was interesting – they are complete opposites. Arkham has the intelligence of an academic new to fieldwork, while Hex just bulldozes his way to his goal (getting a lot more done in the process, as it happens). The clinical appraisal and appreciation of Hex’s methods offers a nice texture to the story, as Arkham’s observations about the bounty hunter’s methods offer the exposition for Hex’s background and character.

The story starts with Hex’s arrival in Gotham, and his quick involvement in the hunt for a serial killer who is butchering prostitutes in the less salubrious areas of the city. As Hex and Arkham’s investigation advances, they realise they may have put themselves into the middle of something far larger and more deadly.

Moritat has used a sparse palette and style to create a very atmospheric book; it’s not overly detailed, but every page looks great. I was reminded of some of 2000AD’s Western-style strips. The colours used could be described as the comic-equivalent of sepia photography – browns, oranges, yellows and black (and everything in between). This was a great choice, and fit the story excellently.

All-Star Western is a noir-ish wild west version of Gotham, with the feel of Deadwood, with a hint of Guy Ritchie’s Sherlock Holmes and also From Hell. I really enjoyed it, and will definitely be following it however possible.

Posted by Civilian Reader at 5:16 AM