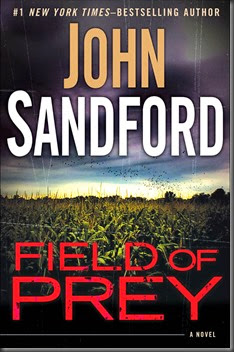 24 books in, series still firing on all cylinders…

The night after the fourth of July, Layton Carlson Jr., of Red Wing, Minnesota, finally got lucky. And unlucky.

He’d picked the perfect spot to lose his virginity to his girlfriend, an abandoned farmyard in the middle of cornfields: nice, private, and quiet. The only problem was… something smelled bad – like, really bad. He mentioned it to a county deputy he knew, and when the cop took a look, he found a body stuffed down a cistern. And then another, and another.

By the time Lucas Davenport was called in, the police were up to fifteen bodies and counting. And as if that wasn’t bad enough, when Lucas began to investigate, he made some disturbing discoveries of his own. The victims had been killed over a great many years, one every summer, regular as clockwork. How could this have happened without anybody noticing?

Because one thing was for sure: the killer had to live close by. He was probably even someone they saw every day…

It really is quite impressive, the fact that this is the 24th book featuring Lucas Davenport (also known as the Prey Series) and it is so very good. Add to that the fact that Sandford is also writing the Virgil Flowers spin-off series as well (each gets a new book each year, for the past seven or eight years), and you start to realise just how talented and disciplined Sandford is as an author. I have read all of the Prey novels, and each one has been at the very least great and gripping. Field of Prey is no exception, but this time you can also add harrowing and intense. A great addition to the series.

Given how Sandford has structured this novel, I think this is perhaps the first one that wouldn’t work as well for a new reader. After priming the main case (the “Black Hole” killer, filled to bursting with multiple dead bodies), the story wanders off a bit. The bulk of the early chapters focus on catching us up with Lucas and his colleagues and family. For me, a devotee of the series, this was great, as it highlighted Sandford’s attention to character development and also his fondness for his creations. 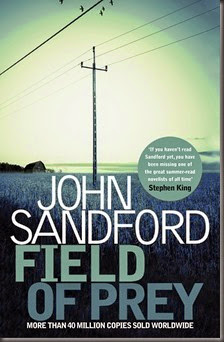 We are shown how investigations can sometimes go quiet, are not CSI-paced. We get to see more of Lucas and his team’s personalities, which is always nice – these characters are so well-established, now, but Sandford still manages to give us more detail and layers. For example, Lucas’s guilt about a collateral victim from one of his justified busts, and Lucas’s scramble to get to the hospital bed of a colleague, later in the book.

What really set this novel above some of the previous installments, though, was the final act. I have never been so on the edge of my seat, fearful for a character’s wellbeing, nauseated by the treatment she receives, and desperate for Lucas to dish out some well-deserved justice! (Not that I approve of vigilante justice or trigger-happy cops in any way in real life…)

Sandford’s prose and plotting continue to be expertly crafted and fluid. The novel is gripping from the very beginning, and I devoured it in just a couple of sittings. His humour remains, mostly as a background extra, although in Fields of Prey is was rather more on the gallows and dark side of the spectrum (no bad thing).

Another triumph of a novel. Few authors are as consistently excellent as John Sandford. Very highly recommended, I can’t wait for the next book in the series. In the meantime, I really need to get caught up on the Virgil Flowers series!

Other Reviews: Dark of the Moon

Posted by Civilian Reader at 4:43 PM