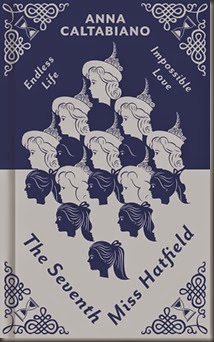 A Most Anticipated of 2014, sadly fails to live up to expectations…

Rebecca, a 15-year-old American, isn’t entirely happy with her life, comfortable though it is. Still, even she knows that she shouldn't talk to strangers. So when her mysterious neighbour Miss Hatfield asked her in for a chat and a drink, Rebecca wasn’t entirely sure why she said yes. It was a decision that was to change everything.

For Miss Hatfield is immortal. And now, thanks to a drop of water from the Fountain of Youth, Rebecca is as well. But this gift might be more of a curse, and it comes with a price. Rebecca is beginning to lose her personality, to take on the aspects of her neighbour. She is becoming the next Miss Hatfield.

But before the process goes too far, Rebecca must travel back in time to turn-of-the-century New York and steal a painting, a picture which might provide a clue to the whereabouts of the source of immortality. A clue which must remain hidden from the world. In order to retrieve the painting, Rebecca must infiltrate a wealthy household, learn more about the head of the family, and find an opportunity to escape. Before her journey is through, she will also have – rather reluctantly – fallen in love. But how can she stay with the boy she cares for, when she must return to her own time before her time-travelling has a fatal effect on her body? And would she rather stay and die in love, or leave and live alone?

And who is the mysterious stranger who shadows her from place to place? A hunter for the secret of immortality – or someone who has already found it?

There is nothing more disappointing than high expectations that are so utterly dashed. There is much to recommend in the synopsis for this novel: immortality, time travel, a bit of romance, and what does appear like a pretty interesting and original premise. Sadly, however, it just failed to engage me at all. I really struggled to get through this.

I’ve been struggling with how best to write the review. I don’t want to just lay into it, as that is completely unconstructive. Too long a review will look like hedging or dissembling. Too short a review will look too dismissive. So, here are three(-ish) paragraphs of my thoughts…

There really wasn’t much in The Seventh Miss Hatfield that I particularly liked. The writing is mostly fine, but rather lacking in flair, and few phrases stood out as noteworthy – and those that did in the moment faded almost immediately. The characters, which should have been pretty interesting and complex, were simplistic and shallow. I did not buy first that the protagonist was from the 1950s, and then none of them felt like they were of the early 1900s (and Caltabiano’s momentary joke of having Rebecca go too far with her vocal affectation was of extremely fleeting amusement). The emotional reactions of the characters are bland or cliché. A lot of the novel seemed to draw heavily on a number of influences, and therefore felt like an amorphous chunk of déjà vu.

The way in which Rebecca is turned immortal by the sixth Miss Hatfield is clunky and all-too-easily accepted by the character. The main thrust of the plot is buried in a rather dull, all-too-familiar unrequited (for no reason that I could tell) romance. Henley’s acceptance of Rebecca’s appearance in his home, claiming to be his cousin, was stunningly easy and implausible. He sees through her ruse immediately, and yet still welcomes her with open arms and no questions asked. The real identity of one off-screen character was transparent from the start – the eventual reveal at the end left me muttering, “Do catch up, won’t you?” (Sorry to be so vague, there.)

I did like this bit, though, as I think it was the only bit in the book that came close to resonating:

“I used to love stories of adventure and books about regular people like me waking up one day and deciding to seek treasure, find their fortune.” Henley’s eyes crinkled in a smile. “I suppose I was like every boy in that way. I wanted adventure.”

“What happened?” I asked.

“You said you used to love stories of adventure. What happened?”

“I grew up.” Henley’s words were hard, but he still had a smile on his face. “I put away the copy of Treasure Island I’d kept on my dresser for years. I knew I had to put my childhood away and become an adult.”

I’m sure there are plenty of people who believe the same. People reading this blog, though, are probably not among them. Holding on to a taste in adventure or fantasy fiction (and TV, movies, comics) is a healthy thing, I believe.

At first glance, this novel held a lot of promise. And yet, reading it, one gets the sense that it is unfinished. Despite its slim length, it wasn’t particularly focused. It was predictable, and lacked any particular depth. Maybe it could have been 50-100 pages longer, with more attention paid to making the characters more three-dimensional?

I don’t think I could recommend The Seventh Miss Hatfield without also heaping on plenty of caveats. The time-travel and immortality aspects of the story held huge potential – for excitement, adventure, and surprises. Sadly, none of this potential was realised.