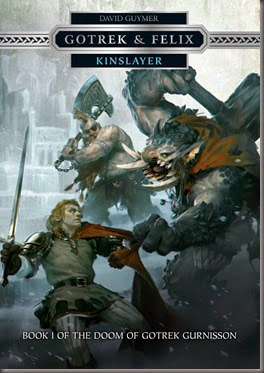 Fans have been clamouring for this novel ever since they turned the final page of Nathan Long’s Zombieslayer. Finally, David Guymer brings the story of Gotrek and Felix back to the chronology begun in William King’s Trollslayer! For some reason, I’ve been unable to keep on top of the non-chronological Gotrek & Felix novels (though I do have all three of them, and really need to get myself caught up). I would like to catch up before this is released, in September 2014, but I don’t think I can make any promises.

Nevertheless, Kinslayer, the sixteenth novel in the series, is likely to be one of Black Library’s most anticipated novels of the year. And, indeed, I count myself among those who are eagerly awaiting it. I have been a fan of the series ever since King’s short stories appeared in Warhammer Armies: The Empire and various other venues. (Inferno! magazine! Anyone else read/remember that?)

Kinslayer is also getting a hardcover release, apparently, which will mark it as the first in the series to do so. Here’s the synopsis:

Once heroes and companions on the greatest of adventures, Gotrek Gurnisson and Felix Jaeger have long since gone their separate ways. Felix, married and working for the family business in Altdorf, embarks on a journey north to Kislev when he hears that an old comrade has been captured by the forces of Chaos. Reunited with Gotrek, and other old friends, Felix begins to suspect that he has embarked upon his final adventure. And in the cold north, Gotrek’s doom awaits him…

This cover also has that tantalising (for fans, anyway) tagline: “Book 1 of the Doom of Gotrek Gurnisson”. What does this mean, I wonder? Are they drawing the series to a close in the relatively-near future? Or, will this be a Marvel-esque tease that fails to deliver utterly on what it promises/portents? (See, for example, the various “deaths” of multiple Spider-Men, death of innumerable characters, the brain/consciousness switcheroos, etc…).

Posted by Civilian Reader at 8:03 PM