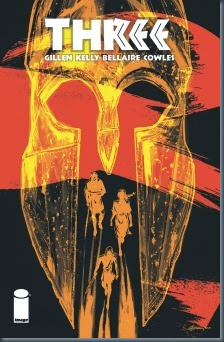 In ancient Sparta, three Helot slaves run for their lives.  Pursuing them are three hundred of their Spartan masters.

This is a pretty interesting, short graphic novel. The artwork is fantastic, and the storytelling is extremely well-done. Not only have the writer and artist done their research, but the story just flows. After a massacre at a village, a rather mysterious ‘cripple’ and two companions find themselves hunted by an army of snubbed Spartans. Chased across the country, they must keep their trail as hidden as possible, placing their fates in the hands of the oh-so-fickle (not to mention absent) gods. This is a really good book.

I liked the way the history was portrayed. While I can’t say for certain if it is entirely accurate or not (as it is not my area), the book contains a discussion at the end by the creative team about how they went about recreating the time, society and country of the age. Really interesting extra. The Spartan society, in particular, is portrayed without the benefit of rose-tinted glasses (or, I suppose, the sepia ones of 300). They are blindly macho, fatally short-tempered, and arrogant in the extreme. Also, as we learn later, they are not at all above cheating to protect their honour and over-blown reputations…

Overall, this is a really good comic. The artwork throughout is great – vivid, colourful, clear and yet not too clean. The ending is not what I was expecting, but in a really good way. It’s brutal, but not gratuitously so. The action is driven by the story, rather than the other way around. The dialogue is realistic, as are the characters. If you have any interest in history, the Greeks, and so on, then you really should check out this book.

Posted by Civilian Reader at 3:56 PM