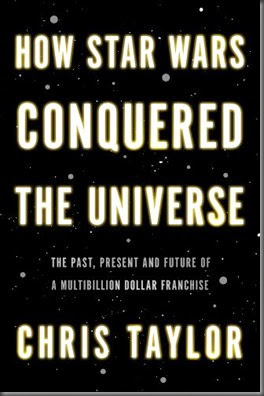 “The Past, Present, and Future of a Multibillion Dollar Franchise”

Now this I’m really interested in reading. As a lifelong fan of the Star Wars franchise, it’s nice that someone has finally written a book about it. Of course, it could be a disaster, but I’m choosing to be hopeful. Chris Taylor is an Editor at Mashable. Here’s the book’s synopsis:

Why do most people know what an Ewok is, even if they haven’t seen Return of the Jedi? How have Star Wars action figures come to outnumber human beings? When did the films’ combined merchandising revenue manage to rival the GDP of a small country?

As journalist Chris Taylor shows, Star Wars might never have been such a wild success if not for the eclectic cast of writers, editors, sound engineers, and marketers who labored behind the scenes to bring George Lucas’s vision to life and sell it to a skeptical public. Essential reading for Star Wars fans or anyone interested in the business of entertainment, How Star Wars Conquered the Universe traces the saga of this media juggernaut from its inception in the early 1970s to the 2012 sale of Lucasfilm to Disney, arguing that the franchise will still be galvanizing our imaginations – and minting money – for generations to come.

Really looking forward to this. How Star Wars Conquered the Universe is due to be published by Basic Books in October 2014.

Posted by Civilian Reader at 12:11 PM