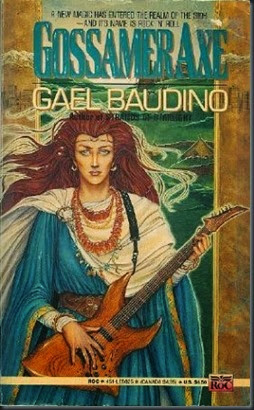 This is the first in what may end up being a series of posts in which I highlight book covers that I think are either bad, hilarious, dodgy, or just strange. This one caught my eye on Goodreads, and I particularly liked the referral to a guitar as an “axe” in the title. Here’s the synopsis…

A doorway between worlds opened, releasing Christa, her harp – and her quest. Imprisoned for centuries, she had escaped from the faery Sidh and the musician Orfide, weavers of spells and schemes. But the doorway had shut too quickly, leaving her lover behind in the endless captivity of a timeless world.

Now, in contemporary Denver, Christa discovers the way to her loved one’s freedom – stunning and powerful electric music that can break down the walls of time. So this Celtic maiden turns rocker, her harp transfigures into an electric guitar, and her newly formed band of heavy metal warriors, called Gossamer Axe, becomes her most effective weapon. Equipped to take on Sidh and Orfide, her dangerous odyssey through a rock world of evil drugs and sex begins – with Christa and her all-girl band on the ultimate road tour to faraway realms!

Urban fantasy, portal fantasy and rock ‘n’ roll collide! I haven’t read the book, so please don’t see this as me passing judgment on Baudino’s writing talents. I just thought the cover was worth sharing. Have you read the novel? Or anything else by the author?

Posted by Civilian Reader at 5:14 PM