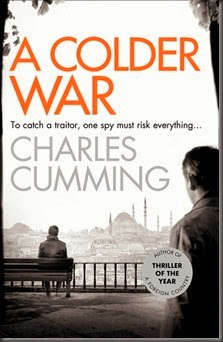 A top-ranking Iranian military official is blown up while trying to defect to the West. An investigative journalist is arrested and imprisoned for writing an article critical of the Turkish government. An Iranian nuclear scientist is assassinated on the streets of Tehran. These three incidents, seemingly unrelated, have one crucial link. Each of the three had been recently recruited by Western intelligence, before being removed or killed.

Then Paul Wallinger, MI6’s most senior agent in Turkey, dies in a puzzling plane crash. Fearing the worst, MI6 bypasses the usual protocol and brings disgraced agent Tom Kell in from the cold to investigate. Kell soon discovers what Wallinger had already begun to suspect – that there’s a mole somewhere in the Western intelligence, a traitor who has been systematically sabotaging scores of joint intelligence operations in the Middle East.

This is the second novel to star Tom Kell, disgraced SIS agent, and apparently the services new go-to problem fixer. At least, for problems that need to be fixed quietly and delicately – more so than the secret service normally requires. A Colder War improves on A Foreign Country in almost every way (quite the feat, given how good the previous novel was), and hopefully marks the beginning of a long-running series to star Kell. This is another engrossing, expertly crafted espionage thriller.

This is the fourth review of Cumming’s work that I will have posted on CR. Each novel has improved on the last, offering something new, interesting and original. It has never felt like Cumming was re-using tired ideas – of his own or the genre’s. In this novel, MI6 chief Levene calls on him to help solve a riddle – this time, the death of station chief in Turkey and the surrounding region. Paul is one of the most respected agents of the SIS, and Levene and he enjoyed an affair years before. (If there is one thing that ties together this and the previous novel, it is Levene’s past amorous relations…)

Despite a long, respectful working relationship between Kell and Levene, with her new elevated station she spends much of the novel frustrating Kell, as her compartmentalisation of information drives him up the wall, and threatens to ruin any positive sentiments. Towards the end, this has an even greater, deadlier side-effect.

Cumming’s skill for crafting tight, engaging prose and well-paced plotting are once again fully on display. Most notable for me, alongside the gripping storytelling, was the way he brought Istanbul and Greece to the page. Having lived in Istanbul, and spent a great many days and weeks in the areas he describes, his prose transported me back there, vividly evoking the city and its environs. Really quite excellent. (He even mentions the British Consulate bombing – a consulate at which I had only months before had drinks with the Consulate General and his family, as part of a British expat event.)

Another excellent globe-trotting thriller. As before, Cumming’s novels remain highly recommended to all fans of thrillers, suspense novels, and especially espionage sub-genres.