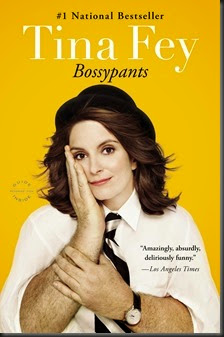 Before Liz Lemon, before Weekend Update, before Sarah Palin, Tina Fey was just a young girl with a dream: a recurring stress dream that she was being chased through a local airport by her middle-school gym teacher. She also had a dream that one day she would be a comedian on TV.

She has seen both these dreams come true.

At last, Tina Fey's story can be told. From her youthful days as a vicious nerd to her tour of duty on Saturday Night Live; from her passionately halfhearted pursuit of physical beauty to her life as a mother eating things off the floor; from her one-sided college romance to her nearly fatal honeymoon – from the beginning of this paragraph to this final sentence.

Tina Fey reveals all, and proves what we've all suspected: you're no one until someone calls you bossy.

I don’t think any book has made me laugh so often and out loud during the opening pages as did Bossypants. In fact, I rarely laugh out loud when I read.

This memoir is self-deprecating, honest, very well-written, and above all hilarious. I’m still not entirely sure how to review memoirs, yet, having not done many of them. In the case of Bossypants, to offer too many examples of Fey’s witty observations and reminiscences would be to kind of spoil the point of reading this in the first place. And there are a lot of very funny moments in this book…

Fey takes us quickly through her childhood and teenage/college years, sprinkling these chapters with her observations about growing up and being a woman (in comedy, college, and society in general).

While my parents talked to the teacher, I was sent to a table to do coloring. I was introduced to a Greek boy named Alex whose mom was next in line to meet with the teacher. We colored together in silence. I was so used to being praised and encouraged that when I finished my drawing I held it up to show Alex, who immediately ripped it in half. I didn’t have the language to express my feelings then, but my thoughts were something like “Oh, it’s like that, motherfucker? Got it.” Mrs. Fey’s change-of-life baby had entered the real world.

I think the only weak chapter in the book was about Fey’s honeymoon on a cruise (this dragged, didn’t really say much, and wasn’t particularly funny – naturally, this meant I thought it didn’t belong…). Every other chapter and topic was fascinating – Fey’s move to join Second City and her adventures there, meeting Amy Poehler, her tenure at Saturday Night Live, the creation and success of 30 Rock. I think I was mainly surprised that there was very little mention of Mean Girls (except in passing). It would have been interesting to read a little more about that movie. As someone who first became properly familiar with Fey’s work during the 2008 presidential election, it was also interesting to read her thoughts about how her impressions of Sarah Palin brought her back to SNL and right into the national conversation (but, damn was she brilliant in that role…).

Alongside the memories, Fey sprinkles some great observations and critiques of various topics and entertainment industry “norms”. These include the difficulties she and others have had in promoting greater diversity in TV and comedy; the stagnant TV executives’ impression of what kind of show can be successful…

… the excessive use of Photo Shop these days…

“Just like how everyone learned to spot fake boobs – look for the upper-arm meat. If there’s no upper-arm meat, the breasts are fake. Unlike breast implants, which can mess up your health, digital retouching is relatively harmless. As long as we all know it’s fake, it’s no more dangerous to society than a radio broadcast of The War of the Worlds. Photoshop is just like makeup. When it’s done well it looks great, and when it’s overdone you look like a crazy asshole. Unfortunately, most people don’t do it well. I find, the fancier the fashion magazine is, the worse the Photoshop. It’s as if they are already so disgusted that a human has to be in the clothes, they can’t stop erasing human features.”

I don’t think I’ve done a very good job at ‘reviewing’ this book. Regardless, and to sum up in a clear, succinct manner: You need to read this book. It’s hilarious, welcoming, intelligent, and very endearing. Very highly recommended.