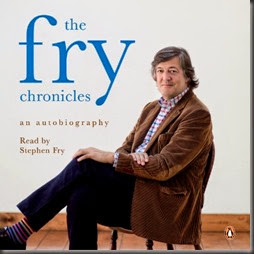 A superb memoir and audiobook, from one of Britain’s greatest comics

Thirteen years ago, Moab Is My Washpot, Stephen Fry’s autobiography of his early years, was published to rave reviews and was a huge best seller. In the years since, Stephen Fry has moved into a completely new stratosphere, both as a public figure, and a private man. Now he is not just a multi-award-winning comedian and actor, but also an author, director, and presenter.

In January 2010 he was awarded the Special Recognition Award at the National Television Awards. Much loved by the public and his peers, Stephen Fry is one of the most influential cultural forces in the country. This dazzling memoir promises to be a courageously frank, honest and poignant read. It will detail some of the most turbulent and least-well-known years of his life, with writing that will excite you, make you laugh uproariously, move you, inform you, and, above all, surprise you.

I am a big fan of Stephen Fry. Ever since I watched Jeeves & Wooster and Blackadder when I was younger (both get frequent re-watches), and right up to my current bingeing on past and recent episodes of QI, I have enjoyed pretty much everything of his that I’ve seen or read. I am, however, pretty new to audiobooks. After a couple of interesting experiments with memoirs and fiction in audio, I decided to try some comedy memoirs. Picking this as my first was really a no-brainer. And I’m very glad I did – this is a brilliant memoir and audiobook.

This really is a superb book, and the production is excellent. Fry’s narration is superb, invested with his mannerisms, self-deprecation, amusement, and humour throughout. It’s a very welcoming audiobook, peppered with Fry’s observations, anecdotes, and plenty of asides. He covers his life up to the mid-2000s, discussing his time in prison in his youth, to his reformatory period (teaching at a school, being accepted into Cambridge) and then going on to become a successful writer and actor. Fry is quite self-deprecating and self-critical, but in his hands the subject, emotion and tone never descends into mawkishness or teenage-angst – it’s an honest, funny account. 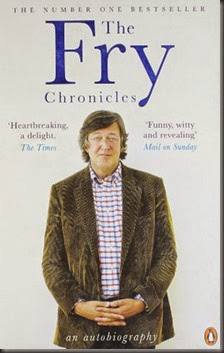 I’ve been trying to figure out which were my favourite chapters and subjects, and yet I can’t select any single one without then thinking of another equally good bit. Really, The Fry Chronicles was never dull – not for a single moment, pretty much. I had intended to listen to this only when I was at the gym (where I can’t stand the radio, nor just plodding along with nothing but the depressing clicking-over of distance, calories burned, and timer to read…). But, about two hours into this audiobook, I found myself listening to it when walking anywhere. Indeed, the fact that I enjoyed this so much has got me listening to a number of comic memoirs (currently, Jennifer Saunders’s Bonkers).

If, like me, you were brought up on Jeeves & Wooster, Blackadder, A Bit of Fry & Laurie, then this is a must-read. The appearances and comments about other beloved British comics and actors are great – including Hugh Laurie, Emma Thompson, Ben Elton and many, many more.