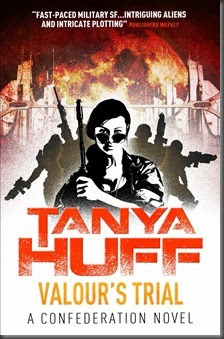 Unexpectedly pulled from battle, Gunnery Sergeant Torin Kerr of the Confederation Marines finds herself in an underground POW camp that shouldn’t exist, where her fellow marine prisoners have lost all will to escape. Now, Torin must fight her way not only out of the prison, but also past the growing compulsion to lie down and give up – not realizing that her escape could alter the entire course of the war.

Four books in, and Tanya Huff is still keeping this series interesting and engaging. Much of what I liked in the first three books can also be said for this one. The characters are pretty much all engaging and well-developed. Torin Kerr remains a fantastic heroine. The action sequences are fantastic. And the setting is well-realised. So, I’ll keep this short, to avoid repeating myself too much. Needless to say, though, this is another great addition to the series.

Torin Kerr still saves the day, through her dedication not only to the Confederation but also to the members of her team (whoever they happen to be on any given adventure). In Valour’s Trial, after waking up in a hellish prison, Kerr and some new comrades are up against a hitherto unknown enemy. After a short while, she attempts an escape with some of her fellow prisoners. While breaking out, she discovers that some of the Others – the opposition in the war in which she has been fighting – are also held captive. Who, then, are their gaolers? What does this mean for the wider war effort?

As before, it’s great to see how Torin deals with the obstacles that her adventurous (perilous) career keeps throwing in front of her. She’s a great character, and thus far has never been dull. Reading about her is entertaining. Huff has done a great job in this novel of writing some great characters – they’re really well-rounded and enjoyable guides to the world/universe, most of all Torin. The humour remains – perhaps a little too similar and repetitive after four books – which adds a welcome levity to certain scenes, and avoids the series from becoming too bleak.

The ending of the novel offers some tantalising possibilities for the next in the series, The Truth of Valour, too. It’ll be interesting to see how different that novel will be. If you have any interest in military science fiction, or science fiction in general really, then Tanya Huff’s Confederation series is a must-read. Highly recommended. Can’t wait to get my hands on the next one!

Posted by Civilian Reader at 10:38 PM