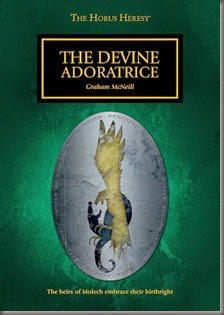 A prequel to Vengeful Spirit

Decades before Horus’s civil war sunders the Imperium, Raeven Devine, ruler-in-waiting of the world of Molech, prepares for his Becoming, the rite that will elevate him to the rank of Knight and bond him with the mighty war machine that will be his steed for years to come. But traitors within the Sacristans have other ideas and a shocking act of betrayal sets the stage for one of the bloodiest battles of the Horus Heresy…

This is a really good short story. McNeill has always been one of Black Library’s best authors, especially when it came to the Horus Heresy series. In this short story, he tells of the Becoming ritual of the Knight family on Molech. The two sons of the world’s ruler are given a parade that will lead to their bonding with a massive, lethal war-machine. However, unseen forces on the planet – remnants of the pre-illumination period – have other plans, and attempt to disrupt the ceremony.

What really stood out for me was how well it was written. McNeill, a skilled author, can often succumb to florid prose (especially at the start of his novels and short stories, which is interesting…). Here, however, he is far more focused and disciplined. As a result, the pacing and narrative flow are excellent. The characters feel realistic and well-rounded from very early on.

Certainly, I think this is one of the author’s best short stories, and bodes very well for Vengeful Spirit, his latest Horus Heresy novel. (Which I already have, and will be starting in the next week or so.) Very highly recommended for all fans of the Horus Heresy series.

Posted by Civilian Reader at 4:17 PM