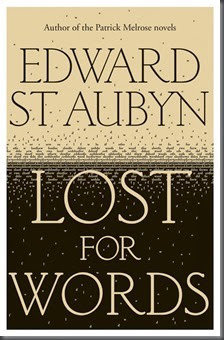 The judges on the panel of the Elysian Prize for Literature must get through hundreds of submissions to find the best book of the year. Meanwhile, a host of writers are desperate for Elysian attention: the brilliant writer and serial heartbreaker Katherine Burns; the lovelorn debut novelist Sam Black; and Bunjee, convinced that his magnum opus, The Mulberry Elephant, will take the literary world by storm. Things go terribly wrong when Katherine’s publisher accidentally submits a cookery book in place of her novel; one of the judges finds himself in the middle of a scandal; and Bunjee, aghast to learn his book isn’t on the short list, seeks revenge.

Lost For Words is the first novel of St. Aubyn’s that I’ve read. And it was, thankfully, very good. It’s rather short, too, which actually gives it a little more punch. If you have any interest in the publishing industry, industry awards, and the people connected to either/both of these, then you should really give this a try. A fun, short, and cutting satire of the publishing industry.

Imagine all of the negative stereotypes that are connected with publishing and authors. Write them into a story about a literary award that is somewhat controversial – because it’s a) an award, b) sponsored by a morally flexible corporation, and c) rather politicised. Don’t forget to include the unqualified and judges with their own agendas (can there ever truly be a qualified and unbiased judge?). Now watch as their egos, insecurities, narcissism and pettiness takes over.

This is a rather fun novel. There were times when I thought it might be a bit too much of an in-joke, but St. Aubyn writes so well (not to mention concisely) that I think anyone who just likes reading good fiction should like this. Throughout reading Lost For Words, characters that were scarily familiar to real people I have come across in real life – from editors, agents, reviewers, authors – that this was a rather uncomfortable, yet very funny and shrewdly observant read. Nobody is safe, and the author takes his razor sharp pen to pretty much every facet of the publishing industry. 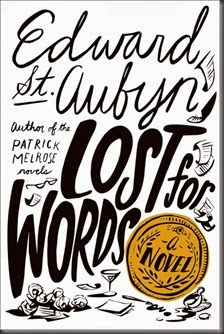 There were some moments when the characters’ pretentiousness took over a bit, as was no doubt the author’s intent, but this does mean some passages drag. Just as time would slow right down if you were actually in conversation with these pseudo-intellectual, pompous blowhards… None of the characters are especially likeable – to say they are flawed would be a massive understatement. They are universally narcissistic, if sometimes gifted. The judges are either clueless, pursuing non-relevant (or misunderstood) agendas, and at odds with each other. The long- and short-list authors are bundles of anxieties and arrogance. Katherine was a particularly unsympathetic character, and I thought the damage she leaves in her wake – especially what befalls her editor – was rather underdeveloped. Not uninteresting to read about, though.

I think the novel could actually have done with being a bit longer – the balance of certain scenes felt off to me, or as if he wanted to include this example of silliness, then this one, then another, without always trying to tie it all together. A bit of a literary hit list, perhaps?

About a third of the way through this, I bought the first novel in St Aubyn’s better known, critically-acclaimed Patrick Melrose series – Never Mind. I hope to get to it very soon. Lost For Words is definitely recommended.