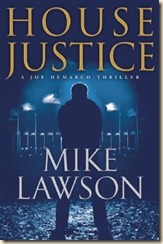 A press-leak, a CIA asset killed, a quest for vengeance and accountability

An American defence contractor attempts to sell US missile technology to the Iranians — and the CIA knows all about it thanks to a spy in Tehran. But then the story is leaked to an ambitious journalist and the spy is exposed, brutally tortured, and executed.

Furious, CIA Director Jake LaFountaine isn’t about to let the death of his spy go unpunished. A valuable asset has been callously sacrificed, and he’s going to find out who did it no matter how many rules he has to break. DeMarco’s boss, Speaker of the House John Fitzpatrick Mahoney has his own reasons to get to the bottom of the leak: he once had a fling with the journalist, and now that she’s in jail for refusing to reveal her source, she’s threatening to expose their affair unless he helps get her out.

DeMarco and the CIA aren’t the only ones looking for the source of the leak. Someone else wants to avenge the spy’s death and is tailing DeMarco, hoping DeMarco will lead him to his prey.

A CIA asset in Iran has been outed and executed. The culprit needs to be found. The Tyler & Tyler firm, attempting to negotiate an arms technology deal with Iran, getting them the tech they need to improve guidance systems of their missiles, seems to be in the middle of the political shit-storm that erupts.

Sandra Whitmore, the author of the news piece that revealed the identity of the CIA spy, has suggested it was a member of the CIA who gave her the asset’s name, and that the spooks had been covering up the story and operation.

What gets Joe DeMarco (and his irascible boss) involved in the case, is when the Director of the CIA goes on television and points the finger instead at Congress, who were briefed and fully aware of the operation. Naturally, DeMarco’s boss, John Fitzpatrick Mahoney, Speaker of the House wants to prevent any embarrasment for his party and also Congress as a whole (experiencing, as in real life, rock-bottom support from the public). Mahoney is a great character. The best description of him is offered by his secretary of almost thirty years, Mavis:

“He was an alcoholic and womanizer and played dangerous games with the taxpayers’ money, money that he treated as his own. He was lucky other people didn’t know what she knew; if they did, he would probably be serving time in federal prison.”

There is something of the Judith Miller scandal (also re-created in a Kate Beckinsale movie) to the first half of this novel. The Miller-Plame case is mentioned, but instead of just naming a spy, as Miller did, Whitmore’s story results in a spy’s death. In other words, a whole new world of trouble. It’s cases like these that really show the arrogance and self-important, self-serving martyr complex of certain journalistic ‘celebrities’. Lawson deals with this very well. Despite her wish to be a paragon of journalistic martyrdom, Whitmore doesn’t want to be in prison, so she is blackmailing Mahoney (they conducted an affair, back in the day) to pull strings to get her sprung. Enter DeMarco, who’s sent by the Speaker to stop her talking and try to free her. As DeMarco sneers at her, “So you wanna be a martyr but you’re not willing to burn at the stake.”

The CIA and Mahoney are not the only factions interested in the case, however, which makes life difficult and dangerous for DeMarco. An assassin we only know as “The Florist” has been pulled out of retirement to do a job involving the Whitmore case – specifically, to avenge the death of the spy. After he discovers DeMarco’s visit to Whitmore, he starts taking an interest in Joe’s own investigation, and starts to follow him. Meanwhile, members of Tyler & Tyler, and various peripheral associates and hired-guns, are trying to cover their tracks by tying up loose ends and silencing potential leaks. Eventually, DeMarco is paired up with a CIA agent to exact revenge on those who caused Mahata’s death. Joe finds himself experiencing serious reservations about both the CIA’s methods and also ultimate objectives. It’s certainly a look at the darker, less-idealised side of American politics and homeland defence.

Lawson’s novels are dependable thrillers: interesting, detailed, with realistic characters, great Washington politics and intrigue. The author has a great gift for portraying DC politics: it’s not comical, it’s not caricatured, but it also doesn’t put a shine on things that do anything but sparkle.

House Justice is a novel of two parts – events around the middle set DeMarco on a different course, with a different investigation and agenda (the result of a CIA-Mahoney alliance). The stakes are higher and the enemy more deadly. Lawson does a good job of keeping the novel rattling along, but when the first ‘part’ was over, there was a slight dip in momentum as the second part picks up and is developed. It’s a pity, as usually I can sit and read a DeMarco novel very quickly. House Justice therefore has a different feel to previous novels, but it is by no means less enjoyable.

House Justice is a classic DeMarco thriller: fascinating and realistic characters, inside-the-beltway intrigue, and a well-thought-out plot sprinkled with surprises. I must admit that I tend to prefer my thrillers with a little more pace, and this is where House Justice differs from previous volumes in the series. At times this felt a little too leisurely for the genre, but it does help set a tone for DeMarco’s jobs (nowhere near as exciting in real life as we’re led to believe by Hollywood). The plot feels spun-out, but the ending is satisfying as all the threads are pulled together well.

If you like Washington-based political thrillers, then House Justice should certainly appeal. Lawson is one of the better authors producing such novels, and even though this novel was slower than I might have hoped, he continues to display why he is ahead of the pack.

Posted by Civilian Reader at 10:41 AM