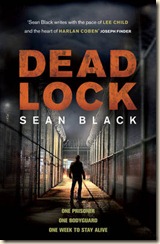 A deadly mission uncovers a deadlier plot to sow the seeds of terror and anarchy in America.

The second outing for Ryan Lock – all-round hero and bodyguard extraordinaire – sees him taking on a lethal job protecting the leader of a white supremacist prison gang. The job is only meant to last five days, but all plans have a tendency to fall off the rails, and this is no exception. Navigating the internal race-politics that characterise life in Pelican Bay is tough work, and Ryan and Ty don’t come away unscathed. After their job is done, they realise the real plot behind Reaper’s testimony, and eventually the deadly plans of a violent fringe group emerge, and Ryan must do everything in his power to prevent it.

Deadlock came at just the right time for me: I had recently watched The Shawshank Redemption and the TV series Prison Break, so the prison and escape premise appealed (of course, the more I read, the more it became clear that the job in Pelican Bay was just the tip of the iceberg). Also, because of other recent reading (No Angel) and viewing material (Sons of Anarchy), America’s scary fringe-criminals hold a certain peculiar fascination for me. So, it was a timely novel.

The novel has a very short preamble – within a few pages, Lock and Ty are entering the prison. This was a very good decision – Black has kept exposition and repeating the events of Lock Down to a bare minimum, allowing new readers to feel at home quickly, and adding nothing that might slow the exhilarating pace of the novel. In Deadlock, Black’s writing is even slicker than before, and I blitzed my way through this novel in just two sittings – even quicker than Lock Down, which was a pleasant surprise. This, in truth, is Black’s main skill – he has a screenwriter’s gift of and appreciation for pacing, feeding the reader just enough to keep them reading from beginning to end. It’s engrossing, so stripped and spare is his prose style.

The realism remains in his characters, and once again every one of them feels real and considered. The white supremacists aren’t cartoony – rather, they are pretty damn scary. If real neo-Nazis are this clever and well-organised, then America is looking like a pretty scary place. There’s a little less humour in this novel, which matches the grim situations Ryan and Ty find themselves in. There is, however, a great scene that distils everyone’s frustrations with US Transport Security Agency ‘protocols’ at airports, and Lock handles it in the way I’m sure everyone wishes they could. In an example of Black’s wry characterisation, here’s how he describes the Aryan Brotherhood’s leadership:

“They looked like the senior members of a Deadwood appreciation society who'd taken the construction of their respective personas just a little too seriously.”

Ryan Lock isn’t quite as perfect as he was made out to be in Lock Down, which was a blessing – he came across a little too sanctimonious and all-American in his debut. Carrie, on the other hand, was a disappointment, and perhaps the weakest character in the novel (odd, as she seemed well-constructed – if peripheral – in Lock Down). Their relationship feels a little strained, as if it was used to make Lock appear more human – when, in fact, his internal monologue, his actions, and his general world-view make him appear perfectly human.

It’s difficult to describe or locate this novel within the thriller genre without coming across condescending or derogatory. In many ways, Deadlock could be described as a “disposable thriller” or an “airport thriller” – it’ll keep you reading through a flight or long train ride, but won’t last much more than that. This isn’t necessarily a bad thing – not every novel needs to be big enough to double as a weighty doorstop (indeed, nowadays it’s not common to find a crime thriller that nears 400 pages). For the author’s purposes, however, he has done an excellent job of streamlining his novel for maximum impact. I imagine this is almost how a novelisation of a series of 24 might read: there’s a prison break, a manhunt, a mole, and a violent ending.

Regardless of what label you wish to put on it, Deadlock entertained me from start to finish; the tension and the stakes are higher, and it’s very well written. If you’re looking for a quick, entertaining, action-oriented read, then Deadlock is a great candidate.