An interview with SEAN BLACK 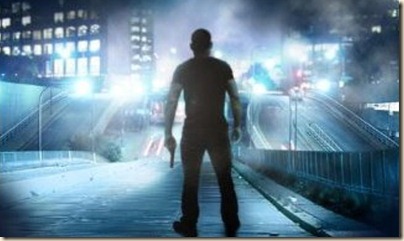 Last year, I was perusing the shelves in my local bookstore, and I came across Sean Black’s debut, Lockdown. It was a great find, as I ended up reading it in just a couple of sittings, much to the annoyance of Emma, who I was visiting at the time. Very soon after, Deadlock was published and I devoured that one, too. Black’s thrillers struck me as very finely-written, quick-paced thrillers that offer a shot in the arm of action and suspense. In other words, just what I look for in a thriller.

I’ve been lucky enough to get a hold of an early copy of Gridlock, the third novel focussing on his lead character Ryan Lock, bodyguard for hire, and all-round tough guy. In advance of my review of the book, and it’s publication, Black was kind enough to answer some questions about his books, writing, and what’s to come.

Ok, I’m going to start with a potentially stupid question, about your novel titles, as it’s one that’s been niggling me: it’s not entirely clear if they’re meant to be single word titles or two (Amazon, etc., all seem to have different ideas). Which is accurate?

There is much confusion, even I get confused because so many people either split or amalgamate them, and yes, I can totally see how it aggravates people. Personally, I always saw them as one word, although for the sake of cover layout it works better to split them into two, so that may be where the confusion arises. 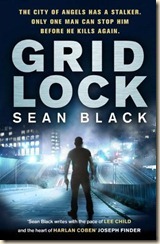 Your third thriller featuring Ryan Lock, Gridlock, is published this year. How would you introduce the series to a new reader, and what can fans expect from this latest novel?

Tough one because my perspective of the series is constantly changing as it develops but here goes. The series centers around Ryan Lock, a close protection operative (or bodyguard if you like), and his partner Ty Johnson as they take on the job of protecting various, and often unsavoury, clients. The books are really fast-paced action thrillers set in America and each book takes you into a very different and often surprising world.

Gridlock, the third book, is set in the adult entertainment industry in Los Angeles, a city I am very familiar with as my wife grew up there and that side of the family, including my brother in law, who is a Lieutenant in the LAPD, call it home.

It’s a darker book than the first two, more psychological, and it comes with a very shocking finale, which will genuinely change the central character. It was the first book in the series where I felt like I was inching a little bit closer to what I wanted to do. I'm still a long way off but I hope I am getting better.

In terms of theme, to me Lock is exploring what it means to be a man and how that intersects with our notions of masculinity and violence and morality.

I grew up on a diet of Scottish and American fiction – everything from James Kelman, Irvine Welsh and (the master of Scottish crime fiction) William McIllvanney through to James Baldwin, Norman Mailer and John Dos Passos on the US side. More recently, I try to at least keep abreast of crime fiction and thrillers but mostly I read non-fiction, partly as research and also because it’s what engages me. I also read a ton of newspapers and magazines and watch just about every documentary that's released. 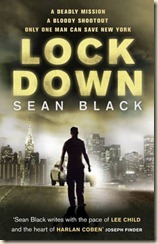 You began your writing career working in journalism and on TV and film. How was it, starting out, and what made you decide to transition from writing for screen to novels?

Starting out as a writer is HARD! I was very blessed because I got published very young and then went off into TV but there definitely were the wilderness years that almost every writer or creative person has to go through where I was teaching and thinking it was never going to happen for me. The problem is that until you get good, you really suck, and the only way through that is to keep going and pray that you’re not wholly deluded about having some small amount of talent. My greatest attribute though is that I am very bloody minded when I set my mind to something, so rejection, while painful, never put me off. I just kept at it.

As a sidebar: The best description of a writer I ever heard was that a writer is an egomaniac with low self esteem.

Compared to working as a screenwriter, publishing is bliss for one primary reason – I have final say. In TV you can be rewritten and I was very much a gun for hire. That said, I am proud of some of my TV work and you connect with a much larger audience, but on balance I love writing novels. Lock is my world, and I have complete control. TV did mean though that I am not overly precious, and I do keep an open mind when it comes to other people’s input, which is a hugely valuable asset for a publisher and editor to find in a writer. If someone at Transworld has a great idea for a title or something else, I love hearing it and using it because, well, why wouldn’t you? I am smart enough to know that I’m not always the smartest guy in the room.

When I was seventeen I spent a lot of time in hospital and undergoing physio recuperating from some major surgery. I also spent a summer time learning to walk again, which is trickier than it sounds and is also very, very boring. So that’s when I started to read seriously and also to write as a way of mediating what I was going through. It was actually one of the most interesting periods of my life – very intense physically and emotionally. I was on morphine for a while (which, I’m not going to lie, is awesome!) and surrounded by men who had gone through terrible traumas – car crashes where they had lost loved ones, rail accidents, periods where they were off their head on drugs and jumping out of windows because they thought they were Superman, you name it – but there was a great esprit de corp and I took away a huge amount from the experience. The Dickens line: “It was the best of times. It was the worst of times.” That was me as a young man and writing found me, and saved me a little bit. Christ, that sounds quite melodramatic, doesn’t it? 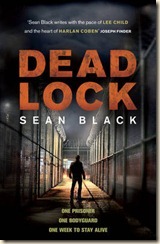 The genre has some of the best writers working today because even the ones who the critics look down upon do one thing, which is extremely hard to do: they entertain people. To me that is no small gift. People’s lives are hard, they often do jobs they don’t enjoy, there is that day to day grind that we all have to deal with. So to take people out of that and transport them with a story, that’s a magical thing to me and something the genre does better than almost any other. Good literary fiction does it too but there is far less of that for whatever reason.

In terms of where the Lock books fit, it’s not something I am pre-occupied with, but if pressed then I guess that  (and this may sound like special pleading)  if you read them carefully they stand quite apart from everyone else at the moment. By the way, that’s not me saying they are better, or worse, but they are, I think different to everything else I read.

Plus, I’m Scottish, but married to an American, and live in Ireland but set my work in the States, and that means I have a certain outsider status – a quality, along with a deep distrust of authority, that I share with Lock.

I just signed a one-book deal for one more Lock book, so I am writing Lock 4 and after that I have a longstanding engagement with a new thriller set in the America. At the the moment it’s called The Return and is much bigger in scope and range than the Lock books. I have already started the hands-on research, which involved me sleeping rough in the Arizona desert and venturing into the tunnels under Las Vegas. After that’s written, it all depends on the readers and what they want next. Ideas, passion, and ambition are three things that I have no shortage of. As a novelist, I am just starting to get warmed up, and my best books, I hope, are ahead of me.

I am reading a bunch of stuff about cutting edge neuroscience and the narco wars in Mexico. I also just finished Dust Devils by Roger Smith, which I highly recommend, and I am about to read a thriller called Sorry by a Croatian writer called Zoran Drevenkar – a much cooler name than mine so I am expecting big things. Oh, and I am waiting for the new Curtis Sittenfeld novel, a literary writer I love. 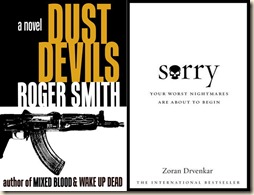 The best man at my wedding played Leo Johnson, the sock wielding psycho, in the TV show Twin Peaks.

Finishing Lock 4, making it better than the first three, and then starting on the next book.

If you would like to learn more about Sean Black and his books, he has quite a good website.

Posted by Civilian Reader at 11:28 AM