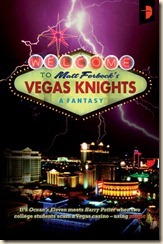 When two college freshmen decide to use Spring Break making magic on the gambling tables of Las Vegas, little do they imagine that Vegas harbours a dark magical secret of its own…

And as they say, what happens in Vegas stays in Vegas – alive or dead.

I am familiar with Matt Forbeck’s previous writing for Black Library (his amusing series of Blood Bowl novels), so I was eager to read his take on urban fantasy set in Las Vegas. Brisk and action-packed, Vegas Knights is an entertaining read.

This is quite a short novel – I blitzed through it in just a handful of sittings – but what it lacks in heft it makes up for in entertainment. The novel follows Jackson Wisdom and his companion Bill, as they take what they’ve learned about real magic (not stage-show rubbish), or “mojo”, and put it into practice at the tables in Las Vegas.

Jackson, our narrator, is a Louisiana boy who got into the University of Michigan on scholarship and loans, where he’s learning about magic. Bill, his companion and classmate, has concocted a scheme for them to go to Vegas and use magic to beat the odds and make piles and piles of cash. From the very start of the novel, Bill comes across like a bit of an ass – the partier who has led Jackson astray (when the two are put next to each other, Jackson looks ever-more likeable). They have gone Vegas for various reasons – Bill to get rich, and Jackson to get enough money to afford college.

“I needed the money. He didn’t. He was doing this for the thrills.”

Or so we are lead to believe… the longer they’re in Vegas, it becomes clear that Jackson is searching for something more than money, and things could get difficult.

The allure of Vegas, the fact that they seem to actually be pulling it off... The lights, the glamour of Vegas are a temptation few can resist, and the two friends find themselves unable to heed certain warnings about what they may be getting themselves into. They soon discover a very different magical ‘underground’, and are introduced to the Cabal – an ancient mafia-for-wizards, if you will – and what could be a very sinister plot put in place by the man at the very top. In Vegas, you have to choose sides, and Jackson and Bill quickly discover that choosing the wrong side can have deadly consequences.

Las Vegas itself is well-realised on the page, and Forbeck is able to bring to life the glitz, the glamour, the gaucheness of night-time Vegas and the slightly run-down day-time Vegas:

“In the bare, blazing sunlight, the [Strip] had lost a lot of its dazzle. If you looked closely, you could see the cracks in the facades. The casinos seemed like the girls Bill sometimes brought back to our dorm room in East Quad – not as pretty as they might have appeared the night before.”

Vegas Knights is populated by a varied, realistic cast – all of whom are fun to read about. The length of the novel doesn’t allow for much character development or growth, but I think in this instance that’s ok – this is meant to be fun. The dialogue is crisp and realistic (I think there was only one instance when it didn’t feel natural), and Forbeck has created a rather winning ‘system’ of magic and how it affects the real world. It would be great to see more novels in the setting. There was one scene, however, that didn’t feel as polished as it perhaps should have been, considering the emotions that should have been at play (it’s rather important to the story, so I won’t spoil it with details, other than to say it occurs on the roof of the Thunderbird Casino).

On the “Harry Potter meets Ocean’s Eleven” description: I think there are better comparisons that could be made. For example, in my opinion, “Dresden Files meets Ocean’s Eleven” (or maybe “… Casino”), would give you a much better and accurate description of what this novel is like. I’m not sure if it’s well-known enough, but I would also say there was something about Vegas Knights that reminded me of the tone and fun of the TV show Las Vegas (James Caan, Josh Duhamel), only with added wizards and mojo. There’s also a small nod to Left 4 Dead in there…

Apart from a slight dip in momentum around the middle, Vegas Knights is quickly paced, and well-written in quite a breezy style with a very natural flow to Forbeck’s prose that pulls the reader along.

Posted by Civilian Reader at 2:47 AM