Upcoming: Journalists getting in on Sci-Fi Action 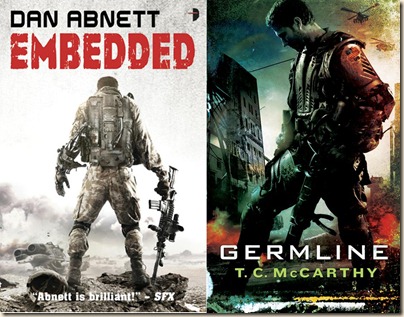 Two novels coming out in the near future feature journalists embedded (in one form or another) with military units as their main protagonists. I’m surprised it’s taken so long for this premise to take hold, given the attention it received during the current Afghanistan and Iraq wars. In some ways, the Horus Heresy series from Black Library has adopted the idea of journalists accompanying military forces, but it was never really central to the story – rather, it was a device to portray the story.

Having studied both international journalism and the role of the media in foreign policy, I think both of the novels sound pretty appealing. The idea of seeing conflicts from the frontlines, but from an outsider’s perspective, offers great scope for intelligent discussion of the nature of war, so transferred onto these speculative settings, we could be in for a real treat.

Here are the synopses:

The colony planet of Eighty-Six looks as dull as all its fellow new worlds to veteran journalist Lex Falk, but when a local squabble starts to turn violent, and the media start getting the runaround from the military high command, his interest is seriously piqued.

Forbidden from approaching the battlezone, he gets himself chipped inside the head of a combat veteran – and uncovers the story of a lifetime. When the soldier is killed, however, Falk must use all his resourcefulness to get back home again… and blow the lid off the whole damn thing.

Abnett, who wrote the first Horus Heresy novel, and introduced the “remembrancers” into that series, takes things one step further in his own creation, as the journalist in question is “chipped” into a soldier’s head – a particularly extreme version of embedding, for sure. Embedded is published in April in the UK. [The kind people at Angry Robot have already sent me an ARC, and I’ll be reading and reviewing it in advance of its publication, so watch this space!]

Germline (n.) the genetic material contained in a cellular lineage which can be passed to the next generation. Also: secret military program to develop genetically engineered super-soldiers (slang).

War is Oscar Wendell’s ticket to greatness. A reporter for Stars and Stripes, he has the only one-way pass to the front lines of a brutal war over natural resources buried underneath the icy, mineral rich mountains of Kazakhstan.

But war is nothing like he expected. The genetics — the germline soldiers — battle heavily armed soldiers hundreds of meters below the surface. Fast, strong, lethal, and totally devoted to the cause, they are the key to winning this war.

The genetics are more than simple weapons, though, and playing with the human genome has consequences. Some inventions can’t be un-done. Some technologies can’t be put back in the box.

Lauren Panepinto of Orbit Books has described Germline as “a story about a journalist in the vein of Hunter S. Thompson who is embedded with a group of US soldiers in a near-future war.” This novel sounds potentially very dark, and that only makes it all-the-more interesting. Germline is published by Orbit Books in August 2011 (the second as-yet-untitled book in the series is currently slated for a February 2012 release).

Posted by Civilian Reader at 2:57 PM