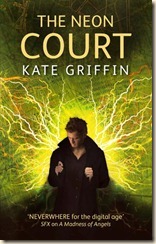 The third Matthew Swift adventure in a magically-charged, alternate London

When the city was founded, he was the mad native spirit that waited in the dark, on the edge of the torchlight. When the streets were cobbled over, he became the footsteps heard on stone that you cannot see. When the Victorians introduced street lighting, he was the shadow who always shied away from the light, and when the gas went out, there he was. The shadow at the end of the alley, the footsteps half-heard in the night.

A daimyo of the Neon Court is dead. So are two warriors of the Tribe. And a freshly-prophesied ‘chosen one’ is missing. Each side blames the other and Matthew Swift is right in the middle of it, trying to keep the peace. Because when magicians go to war, everyone loses. But Swift has even bigger problems. A dead woman is trying to kill him and the city itself is under attack from a force of unimaginable power. As if trying to stay one step ahead of an assassin and juggling magical politics weren’t challenging enough, Swift must also find a way to defeat a primal threat from humanity’s darkest nightmares. Or there may not be a London left to fight over...

Kate Griffin’s London is as memorable as Neil Gaiman’s, and just as dark. Her urban magic ebbs and flows with the rhythms of city life, and her Londoners rub shoulders with sorcerers, oracles and supernatural beings. In The Neon Court, the third novel following urban sorcerer (and not quite human) Matthew Swift is as gripping as The Madness of Angels and The Midnight Mayor.

The first book in the series introduced sorcerer Matthew Swift, dead for two years but back in his body, accompanied by the blue electric angels. A shadow is stalking the streets of London, killing powerful members of the magical community, and it is up to Swift to stop it. The second in the series, saw Matthew compelled to save London again from another threat, this time an untrained and disgruntled sorcerer whose fury has called down the Death of Cities upon London. Both books were characterised by Griffin’s inventive and distinctive brand of urban magic, a compelling version of London, and an unusual cast of characters.

The Neon Court catches up with Swift as he is unceremoniously summoned from a lesson with Penny, his apprentice. In typical Griffin style, we are flung straight into the action, as Matthew lands in a burning building, face-to-face with a religious fanatic and probable psychopath Oda. His relationship with this complex character has developed over time, and Griffin gives her an intriguing back-story that is gradually revealed as the book progresses. The death of a prominent member of the Neon Court (the Faerie Court but, like everything in Griffin’s London, urbanised and rather darker than Shakespeare saw it) in the same building looks set to spark a war between the city’s gangs, and again it is up to Swift to work out what is really happening, for the good of the city.

Griffin’s world is gritty and uncompromising – an oracle’s eyes ooze blood, characters are sick, deformed or mutilated – but this insistence on realism makes Swift a believable hero. When he is hurt he bleeds. In fact, Swift himself is rather a reluctant hero; he wasn’t delighted to be made Midnight Mayor – quite the opposite, and much of the humour comes from his casual or stubborn subversion of his society’s rules. As a character, he is rather more appealing in this book – Griffin seems to have got the balance between the almost child-like nature of the angels and Matthew’s own humanity, which in earlier books was sometimes subsumed. Her supporting characters, too, are memorable – she pulls off the not-as-common-as-you-might-think feat of making us care deeply about the initially unsympathetic Toxik and Dees. In this story, even the henchmen have family lives. However, where she really flies is her imaginative world. From Fat Rat (think subway train, but with a tail) to an A&E in an abandoned hospital, and the people who slip between the cracks: Griffin’s London is teeming with life and magic.

If I have one a gripe, it’s that I expected a little more from the Neon Court itself. I loved her faeries, which made a refreshing change from vampires and werewolves. However, I never felt that I learnt as much about them as I’d like, especially Lady Neon, and struggled to reconcile her supposed power with her ultimate fate.

The plot is just as dark as her previous titles, but I felt The Neon Court also went at a faster pace, perhaps because readers are now familiar both with Swift and the world in which he lives. Griffin takes her characters to the upper echelons of society, when Swift confronts the religious and wealthy Order; and to the very bottom, with the Tribe who refuse to conform to anything, especially society’s idea of beauty.

History is always a part of Griffin’s London, and the creature Swift is facing is older than he can imagine. Discovering how he could defeat it kept me turning the pages long into the night. 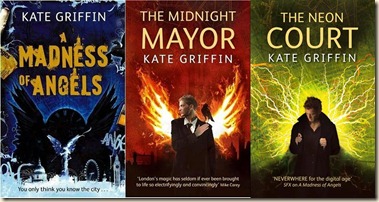