An Interview with Sam Sykes 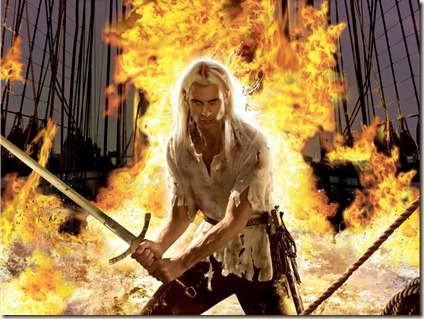 While perusing author Sam Sykes’ singular website, I stumbled across this statement:

No other author loves you more than Sam Sykes.  This is fact, proven by science.  There is simply no way to comprehend a world in which Sam Sykes does not want to hear from you on all topics, whether it be praise for the book, praise for the author, questions about the book, questions for the author, recipe exchanges, brick-hurling techniques, tips for preventing wolf attacks or cannibal recipe exchanges.

So, naturally, I took this invitation at face value, and sent over some questions to the young author of Tome of the Undergates. (Only, with hindsight, I forgot to ask about wolf attacks…)

The Black Halo, the highly-anticipated second book in your Aeons’ Gate series is published in March (US) and June (UK). How would you describe your novels to newcomers, and what can we expect from the second novel?

The Aeons’ Gate is a highly character-driven adventure fantasy detailing the exploits of severely broken people occupying a severely disreputable station in the societies of a severely harsh world.  It’s basically a drama of full of human angst and despair, except instead of talking about their feelings, people solve their problems by jamming thick pieces of steel into soft, meaty bits.

Black Halo goes deeper into the personal deliriums of the six companions, their identity crises, their personal guilts, their senses of inadequacy, their god-given curses, their ghostly hallucinations and their malicious voices that tell them to kill.  Stranded on the island of Teji, a floating graveyard filled with the dead claimed in an ancient war, the companions swiftly become aware that, although they may have loathed each other, each other was all that was keeping them from slipping into madness.  Lots of character development, lots of drama, lots of purple-skinned warrior women trying to kill berserker headhunting lizardmen trying to kill emaciated evangelist demons. 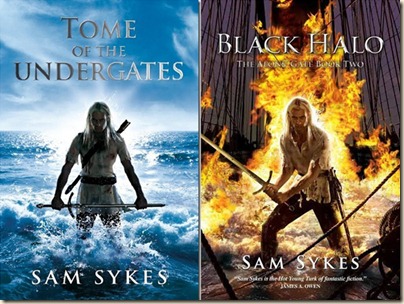 What drew you to the fantasy genre, and who and what would you say are the biggest influences on your work?

I loved Robert E. Howard’s Conan books when I was growing up, as well as The Hobbit (never really got into Lord of the Rings). I suppose it’s safe to say that I sort of embraced my inner nerd around age 14, when I started reading Forgotten Realms and Dragonlance books.  Said inner nerd, feeding off the love I gave it, quickly grew hungry for more and clawed its way out of oesophagus with razor-sharp claws to messily devour what remained of my face and assume its rightful place as my outer nerd.

The concepts of adventure, misfit companions and horrific monsters from those books were an influence, though not in the way one might expect. By the time I had written my book, it wound up looking exactly like any other adventure story: races that all got along for the common good, people whose evil actions or intentions weren’t really their fault, guy gets girl, quest saves world and so forth.  That’s when I started asking questions: why would these people, whose job basically consists of barging into peoples’ homes and visiting bodily and financial harm upon them be considered something to aspire to, let alone good?  Why can’t good people do bad things without there being some mitigating circumstance?  Why can’t the monsters have reasons for what they do?

What was your first foray into writing? Knowing what you do now, what’re your thoughts on your early work?

My first foray into writing was the early form of The Aeons’ Gate, the aforementioned work in which good guys are good, bad guys are bad and everything has an optimistic overtone. I wouldn’t say I’ve abandoned the optimism (whether it’s over or under is difficult to say now), but I understand the significance of conflict more and the concept of motive. I now know why bad people do what they do and why it’s important for them to exist beyond being obstacles to the heroes. I know why it’s important for heroes to have to fight to earn the title.

Still no clue why the Abysmyths turned out as evangelists, though.  Guess they just felt more comfortable that way.

What’s your opinion of the fantasy genre and community as a whole today? You certainly seem to enjoy the mischief Twitter allows…

I have long predicted for the past five minutes that mine will be the first court case that involves Twitter as a character witness against the defendant. And God help me when that day comes.

As for the genre, I think we’re moving forward, albeit slowly. The concept of fantasy as being something vast and encompassing in which several settings and ideas can be used freely is slowly winning out over the attitude that your biggest input on the genre is what your magic system is. Granted, there’s a still a lot of the old tropes being used: Chosen Ones, magic systems, world building over character development and so forth, but we’re seeing new things done with them and a lot of them being questioned.

In the community, I think there is a very real resistance to change and moving forward.  We’ve sort of been clinging to the stories that have been told before as “our” stories, the stories that defined our subculture (that being “nerd,” basically) and we’ve been hesitant to embrace a lot of the newer ideas coming out. I’ve spoken against genre labels before, and I will continue to do so, as I feel this whole trend of “oh no, that’s new weird, not [sword & sorcery]” is just another way to try and resist those changes, as it’s another way to say “oh, I won’t try S&S since it’s all about the grit” or “I won’t read paranormal romance because girls are icky.” It gives us a convenient excuse not to try something new. I won’t say that all fantasy is alike, of course, but I’m saying we’re hitting the point where it’s harder to know what we should label a person’s work.  And while that’s good, the fact that we’re trying harder to label a person’s work is not.

At the risk of not stacking up to people with entire reference libraries, I tend to be something of a research hobo. If I see something interesting, something that really catches my eye, I decide to put it in and see how it fits. Sometimes it works, sometimes it doesn’t. Oftentimes, I’ll see something completely amazing in media or in a non-fiction book and have something in my story that needs something more, be it a character without motive or a people without purpose and see how it fits. The netherlings, for example, started out as fairly generic bad guys: tough women with long faces and a love for killing and weirdo men with the same, although they were more refined about it. Then I saw something on Dexter in which he looks at a person and confesses that he doesn’t understand why life is important. I tried to see how that fit and twisted it and made it my own. Suddenly, the netherlings were no less tough or aggressive, but they were truly alien, having no particular concept of the sanctity of life (which comes into play heavily in Black Halo).

So I guess the writer’s life is pretty sweet. I watch movies, read books and play video games, like I always did, but now I can call them work-related.

How do you see the future of The Aeon Gates evolving, and do you have any other projects in the pipeline (different series, genres, and whatnot)?

The Aeons’ Gate has been, and always will be about the characters. The world is important. The quest is important. The magic and monsters and combat is important. But all of this is only as good as it relates to the characters, otherwise there’s no conflict. Fortunately, between the six of the main companions and their many, many neuroses, vendettas and views, there’s no shortage of conflict. The plot, of course, hinges on them and what they do, so I like to think that it evolves along with them and their conflicts become stacked upon one another and nothing between them is insignificant. Significance, of course, is why we have conflict in writing: it invests us, it keeps us interested in what's going on.

As for other projects... well, no one’s really at liberty to say.

You’ve got quite a broad reading palette, and recently you wrote on your blog about a North Korea ‘kick’ you’ve been on. Who are you reading at the moment (fiction and/or non-fiction), and which books of 2011 are you most looking forward to?

The North Korean reads are a pretty good example of what I was talking about in terms of research. While The Aeons’ Gate takes place in a world primarily removed from civilization, there’s still no shortage of things to learn about a series of books that is all about how people deal with conflict and strain in cramped, oppressive situations. Recently, though, I’ve fanned out into reading memoirs and biographies about the Yakuza, Japan’s own mafia. I recently finished Yakuza Moon: Memoirs of a Gangster’s Daughter by Shoko Tendo which, while a very moving story about the plights of a young delinquent in Japan, wasn’t quite as informative about the actual gang as I had hoped it would be. So right now, I’m balls-deep in Yakuza: Japan’s Criminal Underworld, by David E. Kaplan and Alec Dubro. It follows the Yakuza from their birth in feudal Japan to their influence in World War II to their present day. It’s an amazing read.

Admittedly, I don’t follow a lot of the schedules of big releases. I’ll probably pick up the big names at some point, but I’m very much a “gimme gimme” reader. If I see something, I want it and I take it.  That said, I am paying special attention to The Dragon’s Path by Daniel Abraham. [So are we! – CR]

In general, I want to encourage people to resist stagnation and embrace change. The entire genre was based on people saying “well, what if” or “wouldn’t it be cool if” or “fuck, you know what I’d like to see.” It’s still about that. The next time you see a book that makes you uncomfortable on the bookstore shelf, pick it up, read the first chapter right there. You are never at a loss for having done something new.

Also, if you don’t buy Black Halo, I will leap down your throat and stomp on your liver. 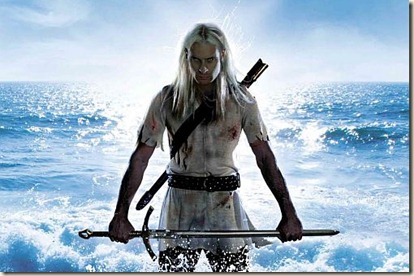 Tome of the Undergates will also be released soon in Germany, through Penhaligon, as Die Tore zur Unterwelt, with the following artwork (which I thought was rather nice): 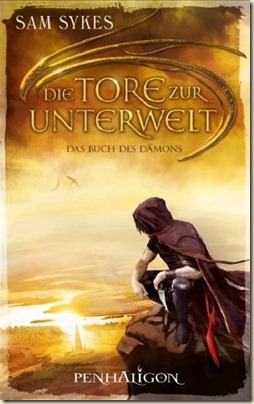