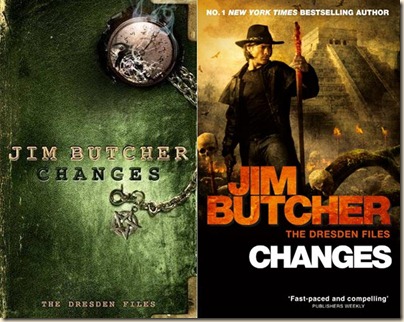 The most explosive, compelling Dresden novel yet

Meet Harry Dresden, Chicago’s first (and only) Wizard P.I. Turns out the ‘everyday’ world is full of strange and magical things – and most of them don’t play well with humans. That’s where Harry comes in.

But even a career of narrow escapes and supernatural shenanigans hasn’t prepared Harry for this. A vampire with a grudge has kidnapped his daughter. A daughter he never knew he had. Furthermore, this vampire plans to use her blood in a violent ritual sacrifice – designed to kill Harry, his ex-partner Susan and their child.

As allies are perilously thin on the ground, Harry must find a new source of strength. In the past, there had always been a line he wouldn’t cross, and he’s never given in to the full fury of his own untapped dark powers. But then, only his own life was at stake.

Magic – it can get a guy killed.

The latest instalment following wisecracking wizard and Chicago P.I. Harry Dresden is Butcher’s darkest and best yet, as Harry’s fight to save the daughter he never knew existed forces him to cross lines not easily re-crossed, as he descends into a darkness that is sure to shape the remaining books in this bestselling series.

Wisecracking wizard Harry Dresden has met some pretty ugly creatures, from vampires to faeries and even darker supernatural monsters, in his years as Chicago’s first and only wizard detective. He’s battled werewolves, got embroiled in faerie politics, caught between two vampire courts, tangled with archangels and seriously pissed off the White Council. However, recently he’s become a Warden himself, and while he’s still ruffling feathers (because he wouldn’t be Harry Dresden if he wasn’t), things seemed to be looking up. Until Changes, when Harry discovers that his part vampire ex-girlfriend has been keeping a secret, and Harry is a father. Unfortunately, a Red Court vampire is out for revenge, and Susan and Harry’s daughter Maggie becomes a target. Harry has always resisted the lure of his own dark powers, but this time, more than his own life is at stake.

Jim Butcher’s wisecracking wizard has always been an appealing character, but as his cases have grown darker, we’ve seen a more dangerous side to Harry himself. Magic can’t help Harry with a broken heart, and it can’t give him all the answers. Sometimes, magic can’t even save him. Despite Butcher’s cast of supernaturals, his books always feel very real: acutely observed and psychologically raw depictions of people, and beings, in a world that doesn’t offer everyone a happy ending.

Harry’s humour is still present, but Changes feels a much heavier book, because while Harry is always invested in his cases, this time it’s personal. It was good to see more of the supporting characters, who are, as always, as important to Butcher as Harry himself. The Leansidhe, Harry’s faerie (and not always friendly) godmother; Thomas, Harry’s troubled vampire half-brother; Murphy, cop, friend and tiny-but-unstoppable force of nature; Molly, Harry’s powerful apprentice; and Mouse, wonderdog.

The plot roars along at a cracking pace, never letting up and building to a bloody conclusion. Over just a few days, Harry has to muster his allies, make a plan, and find his daughter, crossing all sorts of moral lines in the process. He can’t depend on the White Council for help, so he’s forced to turn to his friends, and not everyone will come through this alive. We meet vampires both evil and indeterminate, Knights of the Cross, gods and supernatural beasties, and there’s a vicious battle in a Mayan temple that will change everything.

Changes is an apt title – it feels as though Butcher has been gradually building to a crescendo over the previous books in the series. All the challenges Harry has faced previously, and what we already know of his character – his desire to protect, his loneliness, his fears about what he might be capable of – Butcher places pressure on his hero, and Harry reacts in ways that seem absolutely consistent with a man at breaking point. This really is a turning point, and that’s without mentioning the cliffhanger that Butcher leaves us on, just as it seems that there may be a way out of the darkness for Harry. The wait for the next in the series, Ghost Story, will be an impatient one.

[Changes will be released in paperback in the UK on March 3rd, 2011]

The Dresden Files series will be receiving a re-jacketing in the UK. Here are the new editions (in reverse order): 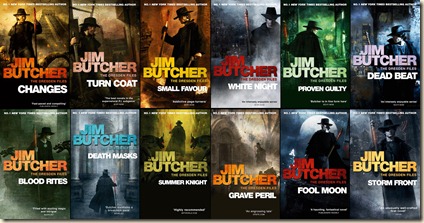 Posted by Civilian Reader at 12:15 AM