An Interview with Mark Charan Newton 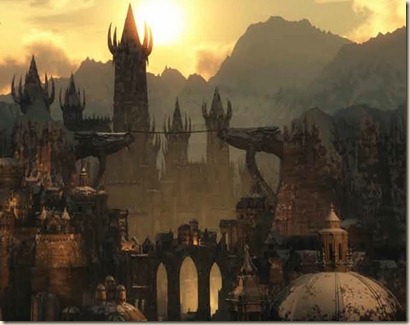 In advance of my review of City of Ruin (coming tomorrow), Mark Charan Newton, author of the wonderfully weird Legends of the Red Sun fantasy series and all-round great fellow, took some time to answer a few questions about his novels, writing, influences, the speculative genre community, and his favourite whisky…

Nights of Villjamur and City of Ruin are the first two novels in your Legends of the Red Sun series. How would you introduce them to a newcomer?

I’m useless at overtly plugging the novels, but I could summarise that they’re far-future fantasies with increasing amounts of experimentation as the series progresses. Whilst the first book has more conservative elements, ultimately I wanted to write something different, especially for City of Ruin. I also wanted to bring a lot of contemporary elements into the fiction – I’m not one to really embrace or subvert tropes – that doesn’t interest me. I’m interested in hopefully bringing some real life into the fantasy, and to make the reader not only entertained but confront a few interesting issues. If they come away still thinking about the novels, then I’ve done my job right.

What can we expect from The Book of Transformations, the third book (published June 2011), and where do you see the series going in the future?

The Book of Transformations is essentially a superhero novel set in secondary world, featuring a transgendered lead. It’s also more explicitly political, but hopefully in an entertaining non-bludgeoning way (that of organised political anarchism versus anarchy). There will be four books in the series and things will end there as best as possible – I probably won’t return to that world for quite a while, however, since my mind thrives on new concepts and ideas. 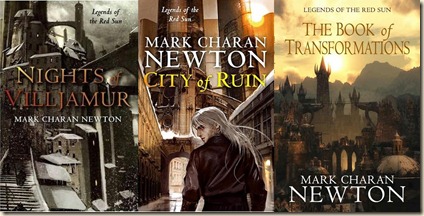 Where do you draw the inspiration for your novels from (characters, events, politics, etc.)?

I really do tend to draw from everywhere – be that in conversations I have, things I see or read in the news, or just something that interests me. I never write about my politics explicitly – I mean it’s there subconsciously, it’s something that interests me, and adds good flavour to the world-building. I tend to think about mixing ideas and concepts to see what aesthetics I come up with – which is probably more obvious in City of Ruin or The Book of Transformations.

What drew you to the fantasy genre, and who or what has influenced your writing the most? What made you decide/realise you wanted to be an author?

I’ve spoken widely about my influences, but they’re probably a lot broader than I tend to give credit for: from China Miéville and Henning Mankell to Steven Erikson and even writers on the left, like Chomsky, for helping to shape some of the imperial world-building (or would world-destroying be more accurate?). I will say there’s no one influence – I tend to always draw something from what I’m reading or see onscreen. There’s something in everything for a writer to observe, I suspect. As for what made me realise? I’ve no idea. I guess I’ve always been creative in some way – when I was younger, it was music – but I tried to write something I wanted to read but couldn’t find on the shelves (which isn’t an uncommon reason people write).

You’re a published author, you run two busy websites, and you’re editor of Games Workshop’s website. How do you juggle all these things?

Discipline – there’s no other way. I come home and set aside a couple of hours each night to work, and have done so for about six or seven years now. The blogging is something I find very easy to do (though I should say only one of the sites could be described as busy!), and it doesn’t take me long to write a post. It’s also something I really enjoy doing, which is probably why I don’t find it a chore, as some people can do. 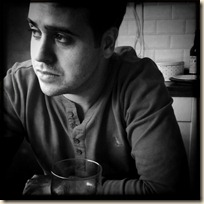 Do you have any particular writing/research practices when developing and writing a new novel?

Each novel tends to be different, but essentially I have to mull over a central idea for a while before I really storm into the novel. That doesn’t mean I can’t explore a few ideas around the periphery of the core, but for the main part that idea develops from whatever’s on my mind. If that central core requires a lot of research, then that’s what I do. But I find the internet incredibly useful (as well as distracting). Once I’m into the meat of a book, I tend to research quite a bit as I go along (depending on what needs the research of course). What’s interesting is the more I get into the series, the more I’m referencing my own books so that I don’t make any blundering errors.

You often write on your blog about the state of the genre. How do you see the genre community evolving?

The community? It’ll move in circles, in expansions and retractions, around the same path it’s probably done for thirty years. There was a great stretch of freedom where bloggers acted independently of publishers, which gave coverage to more esoteric texts, but now publishers have understood the market, they’re influencing things to fit their marketing plans (which I don’t blame them for – this is a business after all). I can’t see anything past the intense saturation of the channels – Twitter and blogs – with new and old writers and publishers getting in on the act. 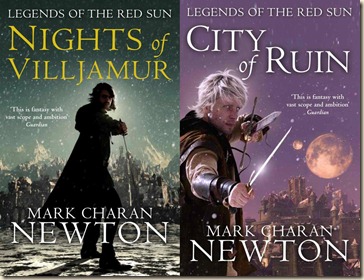 Do you have plans for any other series? Any other projects currently in the pipeline?

Yes. But they’re a secret! And there could be something unusually cool for the fourth book in the current series, which I’m writing now, but I can’t talk about that either, since it might not happen.

What was your first foray into writing, and what do you think of it now, looking back?

Oh, man, it was a pile of crap, a kind of ultra-new-weird desert-based thriller. But, you know, you need to get the crap writing out of the way before you go get to the slightly better stuff. I’m not ashamed of it – it was a first effort, and you need to practice and build up your confidence. I feel I’m improving the more I write.

What are you reading at the moment (non-fiction as well as fiction)?

Daniel Abraham’s A Betrayal In Winter – part two of his first wonderful, sensual, clever fantasy series. Next on the non-fiction list is Eat Your Heart Out by Felicity Lawrence, which is about the food industry at home and abroad, something I’m becoming increasingly fascinated with. [Review of the first Daniel Abraham omnibus: Shadow & Betrayal]

As for books, I’m terribly slow at keeping up with newer titles, and tend to make my choices on a whim, but certainly Miéville’s Embassytown, and there’s going to be a translation of the final Wallander novel by Henning Mankell in March, which I’m very excited about. M John Harrison should have a new novel out towards the end of the year, if I remember correctly. And one final question: What’s your favourite whisky?

Important question! This can change depending on my mood, but Nikka From The Barrel (which got the seal of approval from Julie, my editor, China and Joe Abercrombie at the SFX Weekender) is a very fine blend. I’m also a fan of Ardbeg single malt, too – though have only tried the 10 year old. I’d like to taste some of their other bottlings at some point.

Huge thank you to Mark for taking the time to answer these questions. If you haven’t checked out any of his novels, I would strongly recommend you do so! His imagination is tremendous, his worlds intriguing, and his prose evocative. Nights of Villjamur and City of Ruin are out now, and The Book of Transformations will be published in the UK in June 2011 by Tor.

In the meantime, why not visit Mark’s website? There are some interesting articles and discussions up there, as well as information about all his novels.

Posted by Civilian Reader at 10:13 AM