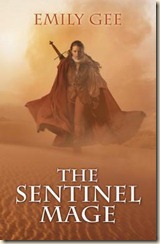 An intriguing introduction to The Cursed Kingdoms Trilogy

In a distant corner of the Seven Kingdoms, an ancient curse festers and grows, consuming everything in its path. Only one man can break it: Harkeld of Osgaard, a prince with mage’s blood in his veins. But Prince Harkeld has a bounty on his head – and assassins at his heels.

Innis is a gifted shapeshifter. Now she must do the forbidden: become a man. She must stand at Prince Harkeld’s side as his armsman, protecting and deceiving him. But the deserts of Masse are more dangerous than the assassins hunting the prince. The curse has woken deadly creatures, and the magic Prince Harkeld loathes may be the only thing standing between him and death.

In The Sentinel Mage, Emily Gee combines a fast-paced plot and compelling characters to create a dark and absorbing work of fantasy. This is a magical adventure, a tale of self-discovery, and, at times, a horror story, and should captivate readers from beginning to end.

The Sentinel Mage moves quickly from the very beginning. Gee wastes no time in setting her plot in motion: she introduces characters and storylines as they are thrown into crisis, grabbing the reader’s attention immediately. In the Seven Kingdoms, magic is reviled and feared, and “witches” (a term used to refer to both male and female mages) are treated as monsters. The curse mentioned in the synopsis is an act of revenge by a mage whose life was destroyed by this prejudice, and turns humans into savage, murderous lunatics. The image Gee paints of the curse is chilling, and creates a sense of urgency that underlies the entire novel.

Gee incorporates a number of different perspectives into her narrative, following three story-lines. The first follows Prince Harkeld and the Sentinel Mages, sent from the nearby Allied Kingdoms to break the curse (and protect Harkeld in the process). This portion of the novel is packed with action and fraught with tension, as Harkeld, Innis, and the rest of the Sentinels battle political enemies, magical defenses, and their own prejudices in their quest to break the curse. The second follows Harkeld’s half-sister Britta, who is coping with the loss of her brother and the deep trauma of an abusive marriage, all the while attempting to operate within the court. I found this story-line to be particularly compelling, and an effective contrast to the more active (but no more suspenseful or dangerous) narrative of Harkeld and his companions. The third thread, cropping up only sporadically, follows Jaumé, a young boy fleeing the madness that has destroyed his family.

Through these three narratives, Gee is able to show the full extent of the curse’s destructive power: we see the danger for the characters, the political instability of the Seven Kingdoms, and, with Jaumé’s subplot, the immediate horror of the curse in action. Gee’s ability to create atmosphere is impressive: there is a sense of tension and impending disaster throughout the novel, which is frequently creepy and occasionally filled with terror. Her characters and settings are also rendered in compelling fashion.

The Sentinel Mage is very fast-paced: the plot unfolds quickly, and the characters reveal themselves through action (frequently of the swordplay-and-magical-combat variety). Gee avoids lengthy exposition and includes back-story only sparingly, and focuses on action and character rather than world-building. I would actually have enjoyed a bit more of the latter: there are so many intriguing elements to the world that could have been fleshed out more, which might distinguish it from the fairly standard fantasy-world it can sometimes appear to be. There were also times when I felt that more about the characters’ pasts could have been included to add more depth to their actions and their motivations – Gee’s characters are varied and interesting, and I hope to learn more about them in future novels.

Dark, tense, and action-packed, The Sentinel Mage is a fast-paced and gripping read.

Also by Emily Gee: Thief With No Shadow, The Laurentine Spy