An Interview with Jon Courtenay Grimwood 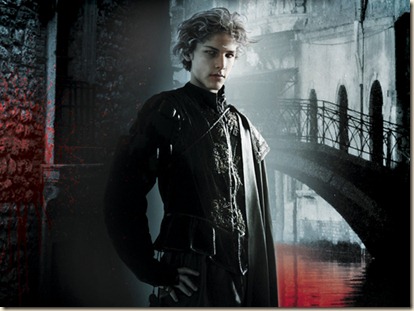 Hot on the heels of his excellent new novel, The Fallen Blade – a novel I very much enjoyed, Jon Courtenay Grimwood took some time to answer a handful of questions for this here humble blog. Given the subject matter of The Fallen Blade, I decided to keep the questions topical and focus on the supernatural.

Tired of Twilight and related teeny-bopper vampire literature? Well, Jon offers recommendations for the more refined palate, and also talks about his writing practices, what he’s looking forward to in 2011, and also the influence of other cultures on his work.

How would you describe The Fallen Blade to someone who knew nothing about it?

On the most basic level it’s a love story because all my novels are love stories, and this one’s between a girl expected to murder her future husband and a wolf-grey haired slave who has some very strange hungers. It’s the tale of the first vampire into Europe and riffs of the first half of Othello, although you don’t need to know the play to make sense of anything. It’s dark and gritty, but not that dark and gritty (well, for me). And it’s the first of three books set in Venice and featuring Tycho and the Millioni family.

Who or what would you say is your greatest influence – in general, and for The Fallen Blade?

Writing Vampires means you have to go back to Dracula, it’s practically compulsory. And it’s amazing how much of what we all take for granted as being established lore come from that one book. But my favourite Vampire novels include Kim Newman’s Anno Dracula [which will be republished in May 2011] and The Golden by Lucius Shepard. 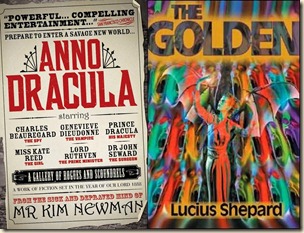 It’s really hard to top Interview with a Vampire as a big Hollywood undead film, although I have a soft spot for crap Italian and French vampire B-movies that mostly involve men wearing bad jackets and women running around in nighties. A whole level above all of this is Let The Right One In, which is a staggeringly beautiful love story and maybe a tragedy with a happy ending simply the beginning of another sad one. And to this mix I’d have to add Vampire Hunter D, probably the best anime vampire film ever.

Being Human is good in a small English are-we-making-a-TV-sitcom-or-a-supernatural-soap-and-does-it-really-matter way. And I love True Blood, the opening sequence alone makes it worth watching although it plays pretty fast and loose with vampire lore.

You’re best known for your sci-fi novels: What made you decide to write a fantasy novel this time around? And how did you find the process? (Differences, difficulties, etc.)

I wrote The Fallen Blade because I wanted to tell Tycho’s story and knew I needed at least three novels to do it, that it opened in an alternate 15th century Venice and features a vampire (possibly), a werewolf and alchemists. That made it fantasy. I’m wary of labels and have had the same book published in three separate languages as science fiction, crime and a straight novel. That’s happening a little with this one too.

The main difficulty was thinking myself into the 15th century and working out how much historical knowledge, if any, I could assume readers would bring to the novel. That said, writing The Fallen Blade was fantastic fun and I now call up the characters in my head.

Your science fiction novels all appear based on or around other cultures. What drew/draws you to these settings?

I’m interested in where cultures clash or rub alongside each other. That’s where the most interesting things happen, and life and love and diplomacy work at its grittiest level. Not within one culture or another, but on the edge where they grind together to create something new that is a synthesis of both. We live in a world where this happens ever more often.

I eat curry and chilli, listen to Japanese music and watch Korean films and wear American clothes and ride a motorbike designed in the UK and made in the Far East. Every city is a dozen cities overlaid on top of each other. Which city you see depends on whose eyes you see it through.

My Venice is ruled by the family of Marco Polo and the two empires that impact on it are the Holy Roman (German) and the Eastern (Byzantine). But the real power base, the Mongol Empire, is almost off screen. What happens in Venice affects all of these. And which Venice you see depends on the shoulder of which character you’re riding. 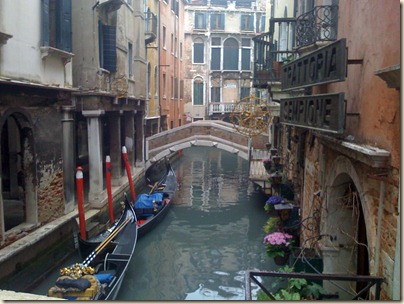 Photo From Jon’s post over at Orbit Book’s blog

I’ve just worked my way through all the books on the Clarke Award list as I’m one of the judges. So that means I’ve read about 60 books and I’m loathe to mention any until the short list is announced. But you can take it I agree with every book on the short list!

What are you looking forward to in 2011?

Delivering the new Venice book and starting the one after that. Eastercon in the UK, Worldcon and World Fantasy in the US. And getting to go back to Venice, I hope! And maybe find someone who runs a class in medieval sword work.

As for what books, DVDs and CDs, I’m not yet sure. I’m a browser and like to buy things I see that look interesting.

Do you have any specific writing habits and rituals/processes, and how do you find being a writer and the whole publishing process?

All writers are superstitious. Well, all the one’s I know. I write the first draft on a laptop and then print out and do a hardcopy edit. I always use the same pen for an entire series of books. So, for the assassini books, I’m using Japanese pens from Muji, which I buy by the dozen. For the Ashraf Bey books that make up Arabesk, I used a parchment coloured roller ball that went out of production. Since I want to write at least another three Raf books and I’ll need the same pen, I bought up every pen of that kind I could find and have several dozen. See what I mean about superstitious? 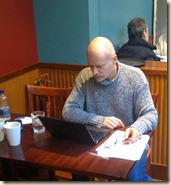 As for the rest, no big rituals. I get up, write in a cafe in the morning, go for a walk, write at home or in a pub in the afternoon. I love being a writer. You never get holidays or anytime off but entirely your own choice, and you earn a living with what you pull out of your head. It’s a fantastically privileged position and I’m very aware of that.

Thanks again to Jon for taking the time to answer these questions (especially when his next novel was imminently due!). If you haven’t yet read The Fallen Blade, you really should – it’s original, dark, gothic, and engaging. I highly recommend it. 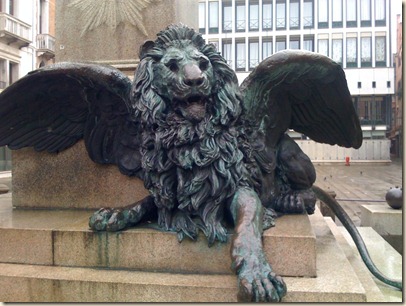 Posted by Civilian Reader at 11:32 AM