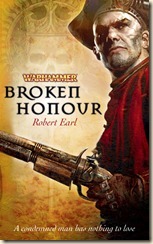 A trial by fire for a new, wholly unprepared regiment of convicts

The armies of Hochland are at breaking point. Beset on all sides by the feral beastmen, the safety and prosperity of the province is shattered. These are desperate times. Mercenary Captain Eriksson looks to capitalise on the conflict, buying the freedom of a group of prisoners to form a new free company.

The criminals are delighted to be released, but this comes at a terrible price – to fight and die in the upcoming conflict. Eriksson must lead his makeshift company into one bloody conflict after another, putting his faith in those who gave up on honour long ago. On the battlefields of Hochland, either damnation or redemption awaits them.

A new regiment is thrust straight into battle, as a devastated Hochland military groans in the wake of a devastating loss to the rampaging beastmen. With some good characters, solid (but not excessive) action, a dark and cynical sense of humour, and some intrigue thrown in, Broken Honour is a great Warhammer novel that stands up to Gotrek & Felix in quality and entertainment, and certainly shows room for growth and maybe some sequels...

Broken Honour portrays the cyclical struggle the Empire must suffer against hostile outsiders – the Hochlanders conduct an annual cull of the beastmen herds living in the surrounding forests. Usually, this is par for the course and they’ve become very adept at it – they have the very well organised and well-trained armies of Hochland who have become well practiced. This time, however, the beastmen are organised, driven, almost human-like in their strategic planning (not least because there is some strategic planning, beyond ‘Charge!’ and ‘Kill!’/‘Eat!’), and the herds have a unifying leader. The game has changed, and the Empire is left struggling to adapt and overcome the sudden lack of experienced soldiers.

This, of course, is where Erikson comes in. He has come to Hochland to create and lead The Gentleman’s Free Company of Hergig – a rather inappropriate name for the rabble, who he ‘recruits’ from the gaol, offering food, a share of plunder, and potential survival against the guaranteed slaughter if they remain imprisoned. It’s not a difficult choice, but also one that many see an opportunity to exploit to skip town.

The company is thrown quickly into battle, long before they are ready or properly drilled, but they acquit themselves with mixed results (helped in no part by new orders that leave them as bait, and a rescue from a local regiment of knights...). Erikson learns an important lesson about Mercenaries: you are expendable before your employer's own men. The Gentleman’s Free Company struggles to come to terms with their new role, some rising to the challenge ably and surprisingly (others utterly failing), while Erikson tries to forge them into a fighting force that can acquit themselves properly on the field of battle. As behind-the-scenes events put the Company in ever-more difficult and deadly situations, Erikson must contend with mutinous soldiers and lack of time to train. Erikson is unfailingly pragmatic, however, and takes what he can to improve his own and his men's lot in the besieged town.

Earl takes an interesting approach to the beastmen. He anthropomorphises them, ‘translating’ their actions for the reader. This makes them seem less alien, but also adds a further dimension to the enemy that Erikson and the Hochlanders must face. Particularly interesting is the beastman leader, Gulkroth’s doubts and insecurities, and near-constant need to reassert his dominance over the herd and reign in their naturally bloodthirsty and hasty demeanour.

The action throughout the novel is well written, very well paced, and highly believable and enjoyable. They are mainly skirmishes, and Earl doesn’t spare on detail (although, we’re not talking Abercrombie levels of detail or grimness). We get a good sense of what it must be like in combat – from the lowly drummer boy up to Erikson, who is more experienced (we only slowly learn more about his background), and also those who are left behind to govern the region.

To add some intrigue and some more off-the-battlefield story, a deserter from the battle in the opening chapter, Viksberg, has managed to fabricate a reputation as the ‘sole brave survivor’ of that action. He stumbles across an actual survivor from the regiment he abandoned, panics, and bungles an attempt to silence him – causing a devastating amount of damage to the Sisters of Shallya’s quarters (they’re a sect of healers), and being spotted by Dolf – a teenager who is accused of the arson, locked up, and then swept up in Erikson’s recruiting drive at the prison. This, naturally, requires another hasty scheme to silence Dolf, which also goes very, very wrong. I think this could have been made more of, but I’m not sure if I’m transferring what I have come to expect from other fantasy series on to this novel – I think the author could have made this more ‘epic’ by delving into the politics and non-battle elements of the story, but I don’t think this is really what the novel was meant to be. Given that this is in a shared/tie-in setting, the lack of world-building is understandable, as the likely market will already know much, if not all, about the Old World of Warhammer.

This could be the beginning of a solid fantasy series – something that could evolve into Warhammer’s answer to Glen Cook’s The Black Company, perhaps, if given some room to expand and develop, and if Earl takes some more chances (there were times when this felt a bit ‘familiar’). I would love to know what Earl could do in a setting entirely his own, but until he shows us, his Warhammer offerings are very well-written and enjoyable.

Earl’s writing has certainly improved, and I have fond memories of the Florin & Lorenzo series as being pretty solid and enjoyable (though more humorous than Broken Honour). He seems more assured, and this is conveyed in a very enjoyable novel. The plot is well-paced, prose in general are natural and the characters are all pretty interesting – while there are many character tropes ticked off, Earl’s creations are nonetheless natural and don’t come across as tired or over-done, and everything in the novel works. His characters are fun (Porter and Brandt are amusing quartermasters, for example), but this novel feels more action-and-plot-driven than character-driven. If it’s going to become more, I think Earl will have to focus a little more on character development next time.

I thoroughly enjoyed reading this: it was quick, fun, with some interesting characters, and dark, cynical humour. Recommended for all fans of Warhammer and anyone looking for a fun fantasy war novel based around some characters that have considerable potential to keep growing.

Posted by Civilian Reader at 10:41 PM