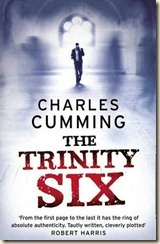 Spies, Cold War politics, and one unsuspecting history professor caught in the middle…

London, 1992. Late one night, Edward Crane, 76, is declared dead at a London hospital. An obituary describes him only as a ‘resourceful career diplomat’. But Crane was much more than that – and the circumstances surrounding his death are far from what they seem.

Fifteen years later, academic Sam Gaddis needs money. When a journalist friend asks for his help researching a sixth member of the notorious Trinity spy ring, Gaddis knows that she’s onto a story that could turn his fortunes around. But within hours the journalist is dead, apparently from a heart attack.

Taking over her investigation, Gaddis trails a man who claims to know the truth about Edward Crane. Europe still echoes with decades of deadly disinformation on both sides of the Iron Curtain. And as Gaddis follows a series of leads across the continent, he approaches a shocking revelation – one which will rock the foundations of politics from London to Moscow…

The ‘Trinity Five’ were the greatest ever embarrassment for the British intelligence services – five high-level intelligence officers who were able to hide their true allegiance to Russia for years (even decades), before either fleeing Britain or being unmasked. All were recruited during their time attending Trinity College, Cambridge. There has been speculation that there was a sixth member of the group, whose role in the scandal has been supressed by the British government for reasons unknown. In The Trinity Six, unsuspecting UCL professor Sam Gaddis is dragged into an investigation of the sixth man, started by his long-time friend and ferocious journalist, Charlotte Berg. After her sudden death, despite his reservations about using her research, and at the urging of her husband, Gaddis agrees to take on the challenge of writing the book on the subject. Little does Gaddis know, however, that others (from both sides of the Iron Curtain) are manoeuvring against him, intent on keeping this stubborn Cold War secret from seeing the light of day, whatever the costs.

Speaking of aging spies, I enjoyed reading Gaddis’s interactions with Tom Neame, his contact for the information and story of the Sixth Man. Neame is a repository of valuable information, but not only is he still enamoured of the mystique of spy-craft (revealing only hints of the greater picture, dangling tantalizing nuggets of information in front of Gaddis – and therefore, the reader – in order to keep him coming back for more), but he is in his nineties, losing his memory and succumbing to the ravages of old age, which makes Gaddis’s hunt for information all the more urgent.

The antagonists of the novel are pleasantly three-dimensional. They are not cartoon-like caricatures of Cold War operatives. The Russians are not simple thugs; rather they are fully realised and at times quite chilling in their single-minded loyalty to Mother Russia. Those working from the British side to keep their old secrets buried are equally well-drawn. As conflicting agendas clash, Gaddis is caught in the middle of a deadly game of hide-and-seek.

Perhaps the best thing about Cumming’s novels is that he is quite different from many of the other successful thriller authors working today. For example, his characters never seem to over-emote – this is something that irritates me in many other thriller novels. It’s almost as if the author’s British-ness comes through and informs his novel. That’s not to say his characters are cold, but rather that his approach and style make them that much more realistic. Also, that his novel takes a look at the Cold War, contemporary Russian and British politics and espionage is a breath of fresh air in a genre saturated by plotlines that focus on the War on Terrorism and the Middle East. The same can be said for his previous novel, Typhoon, which evoked the style and themes of a more-contemporary James Clavell (and was one of my favourite books of 2009). The Trinity Six brings to mind the quality and skill of le Carré – complete with the classic Cold War themes, but with an eye for modern international relations and politics as well. Cumming bridges the Cold War and contemporary thriller genres perfectly.

A superb thriller, exceptionally well-written and compelling, The Trinity Six is essential reading for any and all fans of the genre. Very highly recommended.

Posted by Civilian Reader at 4:29 PM