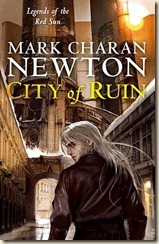 The Second book in the Legends of the Red Sun

Amidst this chaos, Commander Brynd Lathraea, commander of the Night Guard, must plan the defence of Villiren against a race that has broken through from some other realm and already slaughtered hundreds of thousands of the Empire’s people.

When a Night Guard soldier goes missing, Brynd requests help from the recently arrived Inqusitor Jeryd. He discovers this is not the only disappearance on the streets of Villiren. It seems that a serial killer of the most horrific kind is on the loose, taking hundreds of people from their own homes. A killer that cannot possibly be human.

I read Nights of Villjamur a good while back, at a time when I was only just getting into reading fantasy. It was a revelation, proving that my opinion on fantasy had been based on generalised misconceptions. The novel weirded me out, at times, and I couldn’t always relate to the characters, but I was nonetheless impressed with Newton’s imagination and prose.

City of Ruin, which I left for far too long on my shelf, is improved in almost every way and I was hooked very early on. This is a truly superb novel.

When I read Newton’s first novel, I was put in mind of an amalgam of China Mieville’s Perdido Street Station and The Scar (the atmosphere of the former, but the accessibility and style of the latter). After reading City of Ruin, I dare say I think Newton’s even better than that. His novels may not be for everyone, but there’s depth, and captivating prose and plotting, and it’s impossible not to be swept up by his writing.

A lot of reviewers have pointed out how, in Nights of Villjamur, the city Villjamur was as much a ‘character’ as the protagonists and antagonists within it. In City of Ruin, Villiren is wonderfully rendered: from the shanties and underground fighting clubs, to the more salubrious districts, and the tense atmosphere of the docks, and we get a real sense of the city, its politics and strange customs. However, the novel is foremost a study of how people act and behave under adverse conditions; along with the (corrupt) politics of the city and world, City of Ruin discusses discrimination and sexuality, as well as religion and its place in society – all are tied in to the idea of how characters react, and entrenched biases endure, in trying circumstances. Each of the themes Newton touches on have strong resonance for our own world, and they are all handled in an intelligent, nuanced, and interesting way. As events build to the eventual siege, friendships and loyalties are tested, and it is up to each character to either step up and work for the common good, or give in to their own selfish impulses.

There is no one protagonist, no single character who monopolises the novel. Instead, there is an ensemble cast of variously miscreant, devious, proud, and honourable characters; all of whom are interesting and enjoyable to read about.

If I had one tiny criticism, it was that the novel jumps perspectives quite frequently to begin with, as we are reacquainted with characters from the previous novel, and introduced to new ones. I can see why Newton did this, and it wasn’t jarring, but I did find myself sometimes wishing he’d remained with this or that character for just a couple more pages. It was for this reason that, for the first handful of chapters, I was wondering when something might actually happen. A minor niggle, and one that quickly disappears, but one you should be aware of.

As I sank into the world, however, my worries dissipated completely, and I just let the story and the author’s prose pull me along. The pacing suits the temperament of the novel – perhaps a strange word to use, but there was something calm and measured about the novel; Newton is not in a hurry to get us to the end, rather it seems as though the author wanted us to have as full a picture as possible, before things kicked off. He doesn’t overload us with exposition or back-story, but instead the novel unravels at what feels like a very natural pace. Over the course of the first few chapters, the characters fill us in very quickly with brief synopses of the world’s politics and some of the events of Nights of Villjamur. I would say that you don’t have to read Nights of Villjamur to enjoy this novel, but you will certainly get more out of it, not to mention another interesting read.

The author’s prose are, in a word, exceptional. His descriptions are evocative, yet stripped-down. His characters are well drawn, realistic, and nuanced. The plot is gripping and engrossing. Everything works. His world is filled with such weird and wonderful invention, that it’s impossible not to be taken by it.

Newton’s novels can, at times, be rather unusual. I normally like my fantasy novels a little more ‘normal’ or ‘conventional’, but City of Ruin is undeniably excellent, and throws some interesting curveballs at the reader (not to mention its tendency to straddle a good number of genres). The eccentricities of the novels might not make The Legends of the Red Sun the best place to start reading fantasy, but if you’re open to something different, highly original, and beautifully written, then they are a must.

City of Ruin is intelligent, thoughtful, and elegantly brutal. Newton doesn’t shy away from difficult or uncomfortable subjects. On the strength of this novel, I would say that The Book of Transformations (publishing in June 2011) has shot way up on my list of anticipated, must-read novels of 2011, and I won’t wait anywhere near as long to read it. This was a difficult review to write, as I enjoyed the book so much. If I had read this last year, it would certainly have featured in the ‘Best of’ lists.

Thoroughly rewarding and a pleasure to read, City of Ruin is a huge improvement from an already-gifted author, and is very highly recommended. 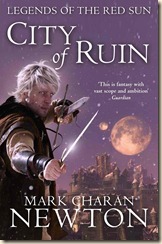