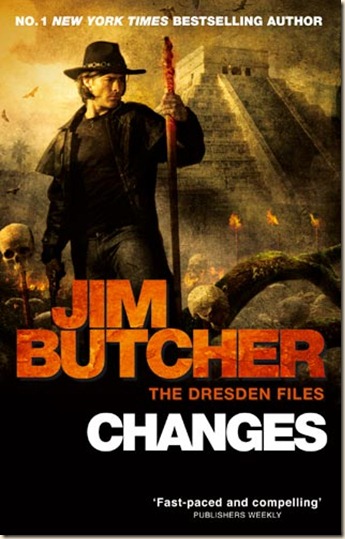 So, here we have the first ever competition on Civilian Reader! And I think it’s a rather good one, too…

Jim Butcher’s Changes – the latest in his wildly popular Dresden Files series – will be published in paperback this coming week in the UK, and I have a spare copy to give away. Emma reviewed the novel a couple of weeks ago, and said Changes is the “darkest and best yet” of the series.

Here’s the synopsis of the book, to whet your appetite:

Meet Harry Dresden, Chicago’s first (and only) Wizard PI. Turns out the ‘everyday’ world is full of strange and magical things – and most of them don’t play well with humans. That’s where Harry comes in. But even a career of narrow escapes and supernatural shenanigans hasn’t prepared Harry for this.

A vampire with a grudge has kidnapped his daughter. A daughter he never knew he had. Furthermore, this vampire plans to use her blood in a violent ritual sacrifice – designed to kill Harry, his ex-partner Susan and their child. As allies are perilously thin on the ground, Harry must find a new source of strength. In the past, there had always been a line he wouldn’t cross, and he’s never given in to the full fury of his own untapped dark powers. But then, only his own life was at stake. Magic – it can get a guy killed.

In order to win the book, all you have to do is email (with the subject “Butcher Comp”) your name and address to:

[One entry per person, any duplicates will be disqualified.]

The winner will be picked at random on Monday evening, and I’ll send you the book on Tuesday. Simple, no? If you want to increase your chances, add an amusing reason why you think you should win the book to your email. (I have a soft spot for people who can make me laugh and I’m unpredictable)

I’m afraid this is only for residents in Europe… Apologies to readers everywhere else.