A Science Fiction Heist set amongst a complex and bizarre, post-human civilisation 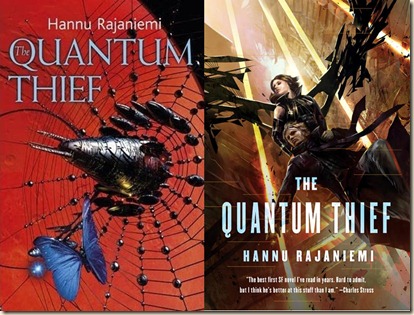 Jean le Flambeur is a post-human criminal, mind burglar, confidence artist and trickster. His origins are shrouded in mystery, but his exploits are known throughout the Heterarchy – from breaking into the vast Zeusbrains of the Inner System to steal their thoughts, to stealing rare Earth antiques from the aristocrats of the Moving Cities of Mars. Except that Jean made one mistake. Now he is condemned to play endless variations of a game-theoretic riddle in the vast virtual jail of the Axelrod Archons – the Dilemma Prison – against countless copies of himself.

Jean’s routine of death, defection and cooperation is upset by the arrival of Mieli and her spidership, Perhonen. She offers him a chance to win back his freedom and the powers of his old self – in exchange for finishing the one heist he never quite managed...

Mind-bending science-fiction. With a heist. Sounds like a brilliant premise. Rajaniemi is a gifted author, and writes in oft-sublime prose, but don’t expect to just sink into this universe – I was left a little adrift as I juggled the various terms that were thrown about without much explanation. That being said, it’s interesting, highly imaginative, well-paced, and often amusing.

Readers of CR will know I tend to lean towards fantasy, thrillers, and tie-in science-fiction (Star Wars, Black Library, etc.). This week, I decided to try something a little outside of my comfort zone. I have read and enjoyed science fiction in the past, but for some reason I’ve always preferred fantasy. Richard Morgan’s Takeshi Kovacs novels, actually, are favourites of mine (and, now that I remember, Morgan’s Market Forces was the first book review I ever wrote, but the final piece was utterly butchered by the editor), and wanted to try something else. After a quick look at other blogs I follow, The Quantum Thief came up quite often, and received good reviews, so off I went and purchased it. I have mixed feelings about it, and I’ll freely admit that I struggled with it at the beginning.

There’s a lot going on in the novel, and Rajaniemi has a great imagination, and such a good written-style that whisks you along with the tale. His characters are complex and well-rounded, and they are believable (they are “post-human”, which offers some twists). Jean himself is particularly strong, as he attempts to come to terms with his new-found freedom, the task he is asked to perform, and the disconcerting fact that he does not have his complete memory.

To describe the novel as just ‘sci-fi’ is to sell it short, as The Quantum Thief intricately weaves a number of other genre stylings into its plot – crime, thriller, heist, action/adventure, and of course bucket-loads of highly futuristic, complex technologies. As a PhD in string theory, the author allows some of his physics and maths knowledge to inform the setting and story. In addition, the ideas of self, privacy, freedom, and also humanity are woven throughout the novel with great skill.

Along with Jean and Mieli’s storyline, Detective Isidore is another strong character, who we follow as he investigates, first, a murder at a chocolate factory (in itself, a wholly unpredictable, quirky location for a murder in science fiction), before being drawn into Jean’s storyline. The new concepts Rajaniemi has come up with that comprise a good amount of this time-line’s daily life and, by extension, enhance a detective’s toolbox are certainly interesting (shared ‘exomemories’, ‘qupts’, and so forth), and add an interesting spin to classic detective-fiction tropes and themes. The “gevulot”, in particular, is an intriguing idea – from what I could tell, it’s a personal privacy-setting/-filter, which you maintain (or not) yourself.

The author sprinkles dark humour throughout the novel, as well as certain sentences or paragraphs that are particularly eye-catching in their endearing strangeness (“There is a dead man lying on the floor, in a pool of chocolate”). Much of the humour comes from Jean himself, who after being sprung from incarceration, must head back to Mars to reacquire his memory before helping Mieli. For example, when he’s still in the Dilemma Prison (itself a devilishly ingenious invention based around Game Theory):

“You never get used to the feeling of hot metal, entering your skull and exiting through the back of your head. It’s simulated in glorious detail… The Archons of the Dilemma Prison want you to feel it. It’s educational.”

At other times, there are darker comments, such as:

“Tragedy is when I slip on a banana peel. Comedy is when you fall into a hole and die.”

Despite these strengths, The Quantum Thief was perhaps not the best science-fiction novel to dive in with. This is not a statement on its quality (Rajaniemi’s prose is really superb, there’s no other word for it), but rather the lack of a narrative guide to this new universe. While the pacing was great, there were many times when I jumped back a couple pages to reacquaint myself with what was going on, and try to figure out what a certain concept or thing was (I was not always successful). This is, for me, the biggest problem with the book: Rajaniemi throws you straight into the action and universe, without so much as a $1 guidebook… I would have welcomed some strategically-placed info-dumps to round out my understanding of the technology, the setting, the species involved in the plot, and so forth, but there are many concepts that are left either entirely or for too long to the reader to puzzle out.

Not until chapter four, for example, did we get some background and explanation of the Oubliette, which is where Jean and Mieli travel to in their attempt to recover Jean’s memory. When they arrive, we get a good deal more information of how this new society works – in particular, the importance of Time as a currency (everything costs units of time, and you only have so much, before you must work as a ‘Quiet’).

In itself, the author’s desire to not spoon-feed the reader is no bad thing, as we do not like to be talked down to, but a little more information, and a little earlier, would have been nice.

As the novel progresses, you do become more familiar with what’s going on, the characters, and how things are connect, but it’s still sometimes overwhelming – especially for this sci-fi novice – and I don’t think I’m wrong to say that some other readers will find the beginning a little over-complex and maybe impenetrable. It’s rare when I wish a novel had been longer, but adding some explanation would have been a real boon, and I would no doubt have loved the book – the characters are very good and, once again, the author’s prose-style is superb. There are times when Rajaniemi’s prose will draw you along and grab hold.

I’ll admit that I was perhaps not the best person to review this, but I wanted to give it a try, and while I enjoyed the writing and characters, I don’t think I appreciated it as much as a devoted sci-fi fan would, and there were times when it was just too sci-fi, if that makes sense?

If you love science fiction, then The Quantum Thief should be right up your street. If not, I offer a wary recommendation.

[If you have read the novel, and want to add anything, please do so in the comments!]

Posted by Civilian Reader at 1:46 PM